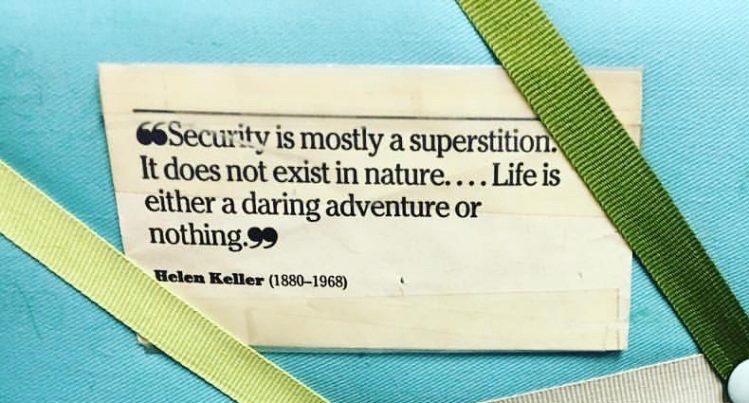 When I was working as a reporter for Catholic New York back in the 1980s, I had one of those quote-of-the-day calendars on the desk in my cubicle overlooking Manhattan. All these years later, after multiple cross-country moves, one of those calendar pages remains with me. It was a Helen Keller quote from March 28, 1988, only two weeks before my mother would die at 47 years old in our family room: “Security is mostly a superstition. It does not exist in nature…Life is either a daring adventure or nothing.”

Something about that quote—and the fact that it was attributed to a woman who had so many reasons not to consider life a daring adventure—struck a chord. I’m sure my mother’s death played no small part in my finding it something worth pondering, worth emulating. After all, she was living proof that there is no such thing as security in this life.

That little folded piece of paper, now torn and taped together, has stuck with me for more than three decades. Even now, those words still resonate. Maybe even more so since I am older and know what this adventure called life can throw at us, some of it exhilarating, some of it downright excruciating. Still, this is the great adventure, and we can either embrace it for what it is or curse it for what it’s not.

As I near my 57th birthday next month, I’m opting for the former. It is not lost on me that I have already outlived my mother by almost a full decade. When you lose a parent, you mark your own life according to their timeline, waiting to reach their death age, wondering if you’ll get beyond it. Every year that goes by, I see more than my mother ever got to see. And I wonder, would my mother’s hair have been like this, her skin like this…

“Embrace everyday adventure” will be my rallying cry. That doesn’t necessarily mean I’ll set off to climb Machu Picchu or even the high peaks of the nearby Adirondack Mountains (although I might), but rather that I will commit to seeking out adventure in my life, even when it would be much easier to seek comfort. Too often we miss the adventure right in front of us and in doing so miss out on the gifts God has in store.

Back in August 1988, only a few months after I first laid eyes on that Helen Keller quote, I had tacked it up in a new cubicle at the Austin American-Statesman newspaper. I had driven my little Chevette with no air conditioning and only a CB radio for communication across the country to Texas and landed a copy-editing job at the daily paper. A co-worker saw the quote and scoffed, rolling his eyes at the suggestion that my current circumstances would qualify as an “adventure” of any kind. Maybe not for him, but for me, yes, it was a grand adventure. It’s all in our perspective, isn’t it? One person’s adventure is another person’s drudgery. We get to decide which we’ll choose.

Another favorite quote that hangs above my desk wherever I go is one from Thomas Merton: “My Lord God, I have no idea where I am going. I do not see the road ahead of me. I cannot know for certain where it will end…I will not fear, for you are ever with me and you will never leave me to face my perils alone.” Two sides of the same coin, I think. A daring adventure requires trust—trust in God, trust in our gut, trust that life is unfolding according to a plan greater than our own.

None of us knows how much time we’ll be given. I look at my mother’s 47 years versus my grandmother’s 100 years. If I’m lucky, my daring adventure could be just getting warmed up, but I’m not taking any chances.