Knowing — and doing — what we’re born to do 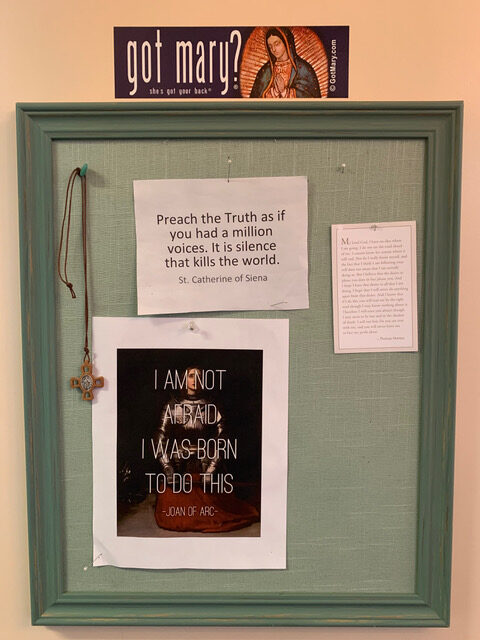 Hanging on my office door is an image of Joan of Arc in all her courageous glory, with a version of her famous quote: “I am not afraid. I was born to do this.” It has been my mantra for more than six years, as I have navigated the often-challenging waters of Catholic communications. It’s not easy being Catho­lic these days, whether we’re sitting in a pew, serving in a parish, or working in a diocesan center. But Joan’s words remind us that we are called to fearlessly follow the still small voice wherever it leads, no matter how intimidating or seemingly impossible.

Her bold statement is not some sort of lightweight greeting-card affirmation. It was spoken by a woman who was filled with zeal for her mission, despite the naysayers, despite the people who thought she was headstrong or crazy, despite the church leaders who eventually had her tied to a stake and set ablaze. All these years later, Joan remains an inspiration, especially to women who are all too used to being doubted, denigrated and dismissed.

What made people feel threatened by Joan then is the very same thing that makes people feel threatened today: new ideas. She challenged the status quo, and that makes people very uncomfortable. Change is never easy. And while change is hard on the person making the actual choice for a different path, it turns out that it can be even harder for those on the outside, where unlikely or seemingly outrageous choices can make people feel confused, fearful and agitated. As someone who has made the unlikely or outrageous choice multiple times in my life, I understand how hard it is to go against the grain.

We’re only a week into the new year and many people will have already failed to live up to the resolutions they set. Why? Because creating new habits and taking new paths is difficult, especially if we don’t anchor that change in something with greater meaning than the number on a Fitbit or bathroom scale. If we want real transformation, something that will change us from the inside out, we have to do the hard work of self-examination, time spent in silence listening for the movement of the Spirit in our lives. When we do that — not just once but regularly — we suddenly find that, like Joan, we are not afraid to do what we were born for.

Last month, the still small voice began to get louder and louder for me, like a drumbeat that could not be ignored. No matter how much I tried to busy myself with projects and trainings, Netflix shows and good food, it was there. Constant. Insistent. Silent but booming. And I knew it was time for me to take that leap of faith into the next place God is calling me to go. It would have been easier in many ways to stay with what was known and comfortable, but most times the Spirit doesn’t offer comfort; the Spirit usually asks us to go to the places that scare us.

So that is what I am doing — with joy and excitement, and, yes, a healthy dose of nervousness. I am leaving the security of my job at the diocesan pastoral center to return to my home-based writing and retreat business, because writing is at the heart of who I am, and it is time to get back to it in a more intentional way. Writing is like breathing to me. I cannot imagine my life without words pouring out onto paper on a near-constant basis. It’s what I have done professionally for 37 years running. Even when I was working a full-time day job, I was writing “on the side” whenever possible. It’s time to flip that dynamic and follow my calling. It is what I was born to do, of that I have never had a doubt, and I am not afraid.

This column originally appeared in the Jan. 6, 2022, issue of The Evangelist.