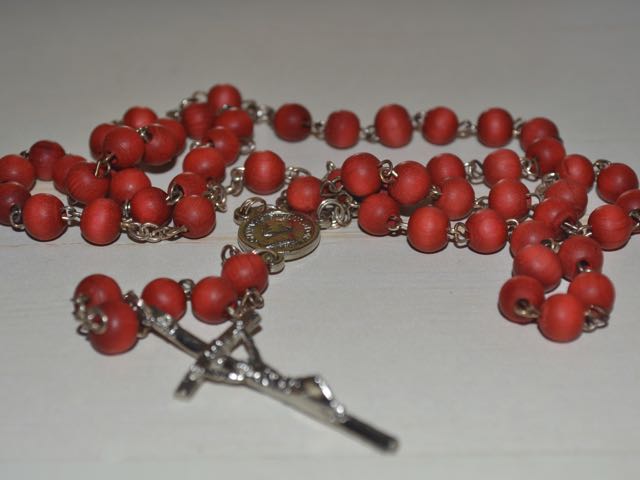 Rosary-challenged. That’s how I’ve described myself for most of my life. Don’t get me wrong. I have more sets of rosary beads than I can count, tucked away in my nightstand and desk drawers, in multiple purses and hanging on my bedpost. When I’m in a panic, the Rosary spills from my lips without warning. I once embarrassed my daughters by reciting the Rosary at full volume on a crowded plane to Rome when we hit a scary patch of turbulence. I reserve the right, as a Catholic girl named Mary, to call on the Rosary at will, even if the prayer is not in my regular repertoire.

No matter how much I wanted to love the Rosary, I struggled with it. To me, silent contemplation felt like home, where the Rosary felt more like an emergency stop on a dark highway.

A few weeks ago, however, in the middle of the night when I could not sleep, I blindly felt around my nightstand drawer for the strand of purple beads I knew was hiding in the corner. I pulled it close and began to pray. I fell asleep somewhere during the first decade and woke up to find the rosary beads tangled in the bedsheets. The next night, I pulled out the beads again and started praying, knowing I’d likely fall asleep before I could finish five decades or maybe even one. And so it continued, night after night.

I no longer find it strange to search for my beads before bed each night and slip them under my pillow. I have to admit that while I find my conversion somewhat fascinating at this later stage in life, I don’t find it completely surprising. Whenever I talk about the many prayer options in our Catholic tradition, I urge people to remain open to methods that don’t seem to suit them. The Liturgy of the Hours that was so out of sync with life as the parent of small children may provide the perfect rhythm for a life in retirement. The silence that seems deafening in one phase of life can feel like a soothing balm at another.

At night, as I move the beads through my fingers and silently say the words to prayers that are as familiar as my own name, I wonder what caused this shift. Certainly, it did not come from me, and so I welcome it as a gift of the Spirit, an unexpected grace. I don’t know if it will last forever, but for as long as it is here, I will embrace it, open to whatever grows out of this new love for an ancient tradition.

Since taking up the Rosary daily, I am much more aware of just how many rosary beads are constantly visible in my home and office—hanging from the statue of the Blessed Mother on my dresser, strung from the Mexican mirror in my kitchen, sitting on the shelf of my office bookcase. I’ve got a glow-in-the-dark single decade in a purse pocket and rose-scented beads blessed by the pope, a brown knotted strand purchased and blessed in Assisi when I led a pilgrimage in 2014, clear crystal beads given to me by my fifth-grade religion class, and wooden beads my husband laid on the open tomb of St. Catherine of Siena on her feast day and our wedding anniversary when he was in Rome.

And while my many beads are beautiful, each in their own way, it is the prayers themselves that hold the real beauty and power. Even if I had no beads at all and had to count on my fingers, the Our Fathers and Hail Marys would sparkle like diamonds in the darkness and light my way.

This column originally appeared in the July 1, 2021, issue of Catholic New York.