With Rome in my sights

I’m just a couple of weeks away from my trip to Rome. I’ll be blogging here throughout that trip, with photos, observations and more. I hope. As long as the high-speed internet in my hotel room exist 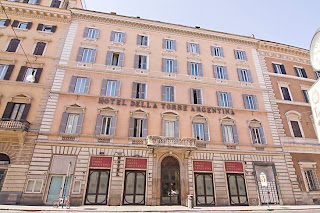 s, as promised. (That’s my hotel on the left — Hotel Della Torre Argentina.) Here’s my August Life Lines column about this upcoming trip:

For the past couple of years I’ve been obsessed with traveling to Italy. I made a promise to myself to get there, somehow, before I turn 50, which is in two years. I didn’t really see how it was going to happen, but the longing was so strong I kept holding out hope that a minor miracle would occur. I realize that international travel does not typically rise to the level of miraculous but that’s pretty much how I see it from where I stand, not having made it past Mexico or Canada since my college trip to China in 1984.
I’ve worked for the Catholic press for more than 25 years (starting as an intern at Catholic New York in 1984), so I felt a visit to the Church’s home office was a logical destination choice. Add to that the fact that my grandfather was born in Naples and my grandmother’s family hails from Avellino and, well, Italy just seemed like a place I had to visit at least once in my lifetime.
Then, a couple of months ago, I received an email from a Catholic writers’ group. It explained that a seminar for journalists who cover the Church had extended its deadline and there was still time to apply for the program, which would be held in…wait for it…Rome. At the time I didn’t even have a valid passport.
To make a long story short, I got the passport, was accepted into program, received a scholarship and booked a flight. In just a few short weeks I will be headed to Rome for ten days of what promises to be part professional opportunity, part spiritual pilgrimage and part personal adventure. The Church Up Close program, which will be held at the Pontifical University of the Holy Cross, is filled with in-person “encounters” and classes with high-ranking Vatican officials as well as visits to the usual tourist haunts – St. Peter’s and the Sistine Chapel – and some not-so-common sights as well. We will be among the small number of daily visitors allowed into the Scavi, the excavation site beneath St. Peter’s Basilica believed to contain the tomb of St. Peter and others.
But even more than those “official” events, I am looking forward to simply being in Italy, wandering the streets, stopping in churches, sipping cappuccino, and soaking up a culture that runs through my veins even if it has not been part of my life up until now. The idea of walking through the incredible history of the Eternal City is beyond what I can imagine, even as I devour travel guides and Vatican journals and novels set in Rome. I can’t wait to be a pilgrim — to walk in the footsteps of saints, to stand in St. Peter’s Square, to attend a papal audience, to experience the land of my ancestors.
Pilgrimage has always been an important part of our faith. Since the earliest days of Christianity right up to the present, believers have traveled to the places critical to our faith story, places that allow us to enter into a long-ago moment in time so that our spiritual lives can receive an infusion of courage and strength and inspiration.
In their book “The Journey: A Guide for Modern Pilgrims,” writers Maria Ruiz Scaperlanda and Michael Scaperlanda remind us of the significance and power of the pilgrim journey: “Although pilgrimage is often lonely travel, it is never unaccompanied. Whether we see them or not, or know them or not, others journey with us.”
Although I will travel to Rome alone in September, I will not be “unaccompanied.” I will be surrounded by thousands of other pilgrims walking the same path, by the spirits of untold numbers of pilgrims who have made this journey for century upon century, and by those unseen pilgrims who have not yet set foot in Italy but have promised themselves that they will some day.