Rome: The Real Thing, Day One 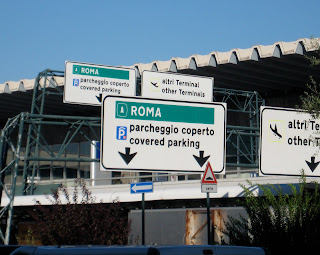 Rome is off to a good start. My plane arrived on time. My driver was waiting outside customs. My hotel room was ready early. Couldn’t ask for more. Okay, I asked that the high speed Internet in my room work, as promised, but so far that hasn’t happened. I’m in the lobby until they get that taken care of. I spent an hour on the phone with tech support this morning, believe it or not. What a silly way to spend time my first morning in Rome.

I’m just back from a long walk. I got lost. A lot. I got blisters. Already. Apparently my walking sandals are made for the cushy suburban streets of Delmar, not Roman cobblestone. Could be a long ten days for my tootsies.

First I happened upon Largo Argentina, which includes the remains of four ancient Roman temples and is the spot where Julius Cesar was murdered. It’s overrun with cats now. See the little while kitty in the one photo below. That’s for Olivia. She wanted to see. 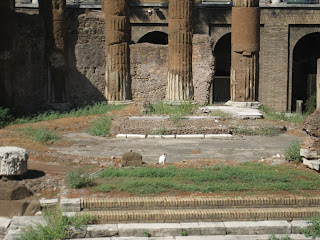 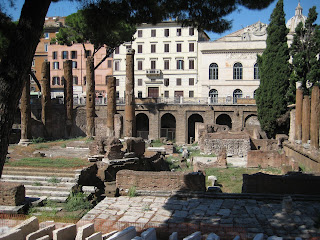 On the way to Campo di’Fiori I passed two Missionaries of Charity, who spotted a homeless man and stopped to give him food and talk to him ever so gently. 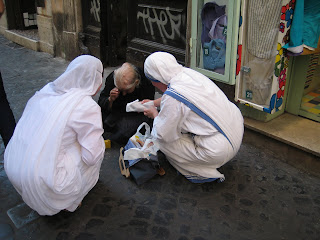 From there I wandered in circles for a bit until I found Campo di’Fiori, where I was able to buy the pizza bianco that I talked about in my food post. That’s me holding my pizza from Il Forno below. I took it to a little park and sat and ate it among Romans there with kids and grandchildren and boyfriends and girlfriends. 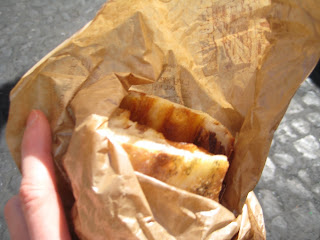 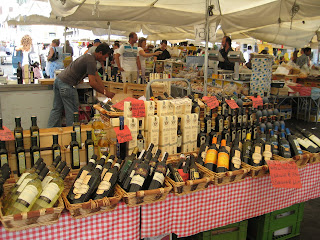 Then I tried to find Via Julia and found Ponto Sisto instead. The photo below is taken from the bridge over the Tiber. You can see the dome of St. Peter’s in the background. As I took this photo, a young man nearby was playing Michael Jackson’s “Beat It” on the accordion. It was a bit surreal. 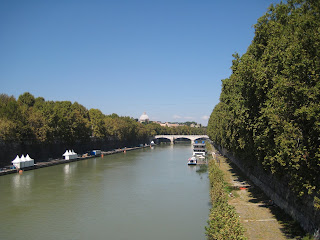 Finally I worked my way back to Piazza Farnese and, eventually, Piazza Navona where I took pictures of the fountains, of course. I was going to stop for gelato but decided to come back to the hotel to cool off and change shoes. Here’s Piazza Navona: 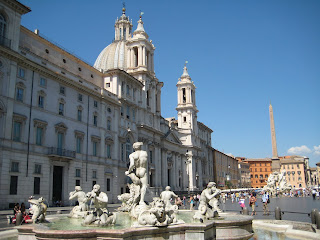 Unfortunately all but one church I tried to visit was closed for siesta by the time I got there. I forgot. It feels like 10 p.m. to me since I haven’t slept, so my schedule is way off. I’ll try again later or tomorrow. Now it’s off for a little more rest before I head out to see the Pantheon and find some dinner. A domani.