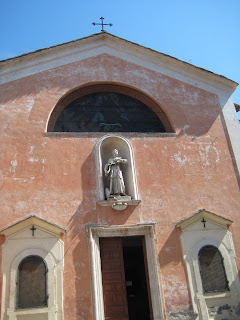 Throughout my Roman adventure, I found that the most moving moments were often the hidden ones, the moments when I met someone or ended up somewhere that I hadn’t planned or expected. So I thought I’d begin to share some of those moments that make for my most lasting memories of Rome.

On my second full day in Rome, I struck out on my own to try to squeeze in as much sightseeing as possible before the “Church Up Close” program began the next day. So after a delicious breakfast of cappuccino and cornetti, I went to Mass at the Gesu, the Jesuit church near my hotel, and visited the rooms of St. Ignatius. Then I made my way to the Vittorio Emmanuele Monument, the Imperial Way, the Colosseum, and, eventually, the Roman Forum. And although I could clearly see the Roman Forum from where I stood outside the Colosseum, getting inside the gates wasn’t so simple. I began walking up a hill, only to find an entry point closed with an arrow pointing me toward another hill, where I assumed I’d find the correct entry gate.

So, on this 90 degree afternoon when I was hot and hungry from wandering all over and skipping lunch, I began the long slow climb up Palatine Hill. And I climbed. And I climbed. And I wondered, Am I going in the right direction? But it was beautiful and there were some others making the same climb, so I trudged on, passing the beautiful cloistered monastery of San Sebastiano on the way up. Finally, I got to the top. A dead end. Wrong turn.

But there in front of me was the simple but stunning Chiesa di San Bonaventura al Palatino, as seen in the photo above. And it was open, despite the fact that it was siesta time. So I went in and found a little oasis in the desert. In that lonely, darkened church, a lone voice sang Gregorian chant, and as I knelt there, grateful for the mistake that led me to this place, I was reminded again that pilgrimage is not about checking off a list of destinations visited but a journey meant to take us to places we have never imagined.

There were so many moments like that on my Rome trip, moments I hope to share with you in the days ahead. And it makes me wonder, how many of those moments do I miss in my everyday pilgrimage through life here at home?

A Moveable Feast: Assisi, outside the city walls

November 18, 2014 • Italy Pilgrimage 2014, Travel
Yesterday we spent the day -- two days, really -- wandering around the city of Assisi. Today we're going to venture outside the city walls. On our second day ...
Read More