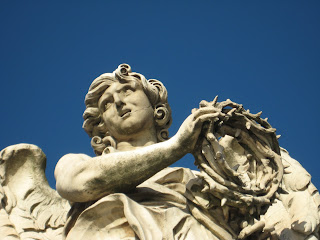 I promise that at some point soon I’ll give you some reflections on this Roman adventure, but for now you’ll just have to put up with photos and brief observations. This has really been the trip of a lifetime. I am astounded by the moments of grace that come one after another — as if out of the blue — every day of this trip. It has been the most amazing blessing. To top it off the Church Up Close program has been beyond anything I could have hoped for. I wish every Catholic — and non-Catholic — could sit it on these sessions. They would never think the same way about the Church again. The sessions are informative, honest, inspiring. You name it. So here’s a bit of what I’ve been doing the past three days:

The Church Up Close program provides us with lunch, in this case at an amazing little restaurant just around the corner from Santa Croce University. Here’s the antipasto from the first day. Need I say more? 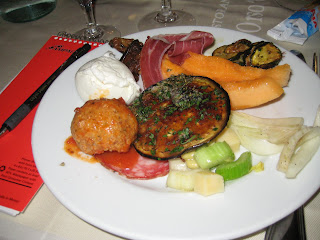 During a break between classes, I ventured up to Piazza del Popolo to have my picture taken between the “twin churches.” I have an original etching of these churches hanging in my dining room back home, so it was especially cool to stand in this spot. 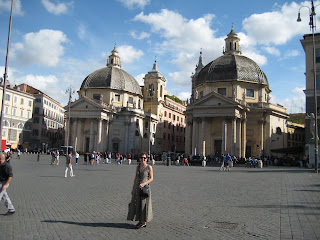 The next morning at 6:45 a.m. a colleague and I walked over to St. Peter’s for morning Mass. This is the time to go to St. Peter’s. You’ll have the place to yourself. I was able to stand in front of the Pieta with no one else around: 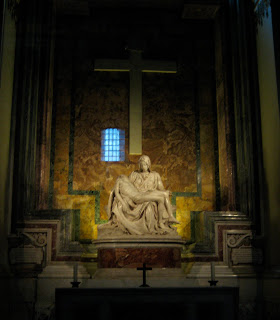 I was also able to touch the foot of St. Peter without standing in line (so many pilgrims have done this they’ve worn his toes right off): 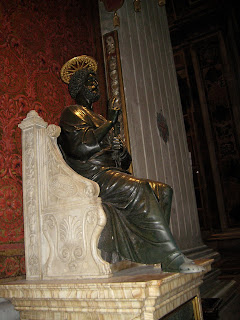 At this time of day, Mass is being celebrated in every chapel in the basilica. We joined one where the Nigerian priest was offering Mass in Italian all alone. Spectacular experience. I followed that up with confession. Two sacraments in St. Peter’s. Not a bad way to start the day.

On the way out of the piazza, we spotted a horse having a little breakfast. We stopped for cappuccino and cornetti at a nearby shop and, yes, I drank my coffee standing at the bar like a true Italian (as was on my wish list). 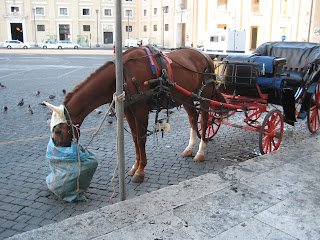 After a full day of classes, nine of us headed across the Tiber to Trastevere, a funky little Roman neighborhood with my favorite church of all time (outside of St. Peter’s): Santa Maria in Trastevere. Here’s St. Peter’s at sunset from the Ponte Sisto bridge: 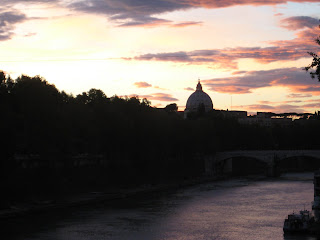 Here’s Santa Maria in Trastevere, one of the oldest churches in Christendom. Just beautiful. We attended sung vespers with the Community of Sant’ Egidio. I sat there and cried like a baby before they even started singing. Most powerful moment of the trip. (More to come on that later.) 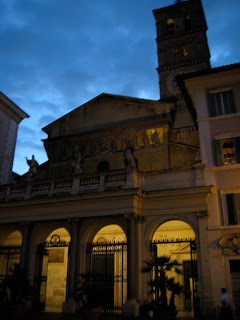 We had another busy day of classes today and then I tried to squeeze in lots of things I really wanted to do. I made it to the Capuchin Crypt, which is decorated with the bones of 4,000 monks. Unfortunately, they are very strict about the no photo policy. You’ll have to trust me on this one. It’s beautiful in a scary and bizarre sort of way. In front of the skeletons it says this: “What you are, we once were. What we are, you will be.” A little light food for thought.

I stopped at the Spanish Steps on the way back. A popular place on a Saturday evening in Rome: 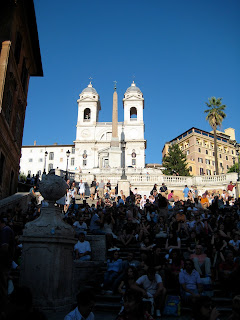 I liked Caravaggio’s paintings before this trip. Now I love them. The are are three at San Luigi di Francesi, not far from my hotel. Just for the record, in the past 24 hours, I have seen numerous Caravaggios, Michelangelo’s Moses, Bernini’s St. Teresa in Ecstasy and more. All in free and fabulous churches. I love this city. 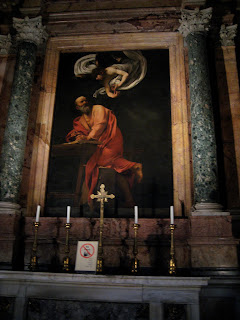 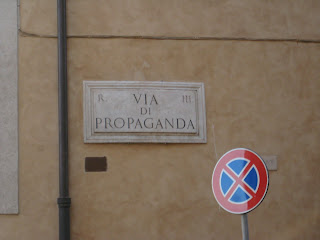 I planned to make it an early night and picked up gelato for dinner. But, one of my “classmates” called and asked if I would be joining some others for dinner at a restaurant run by French-speaking African nuns who wear traditional dress. So, off I went. Nice dinner, followed by an even nicer little ritual: The entire restaurant sang the Ave Maria in Italian with the Sisters.

Rome: Che bella citta. Here I am with tonight’s group of journalists. More to come… 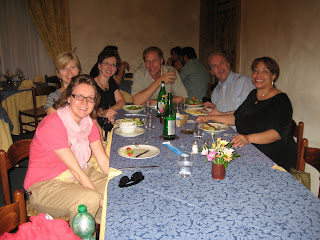 A Moveable Feast: Assisi, outside the city walls

November 18, 2014 • Italy Pilgrimage 2014, Travel
Yesterday we spent the day -- two days, really -- wandering around the city of Assisi. Today we're going to venture outside the city walls. On our second day ...
Read More