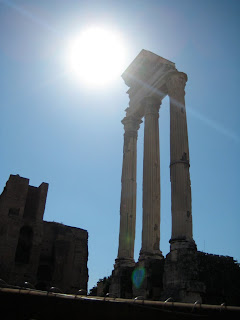 I have not stopped moving since I finished breakfast this morning and it’s almost 5 p.m. What can I say about today’s Rome travels. I am awed, overwhelmed, exhausted, hot, hungry — but happy. I saw so much today that it’s really hard to take it all in.

My day began with me accidentally stealing someone’s table in the hotel breakfast buffet. It was crowded. I was walking around with coffee and fruit looking for a seat, any seat. I asked several families if I could take an empty chair. Sorry. Occupado. And then I saw a lovely little table just being cleared, so I put my stuff down and relaxed. As I was going back for a little more coffee, I spotted a woman who had been standing in the corner (I thought she was waiting for someone) taking the table right behind me. I realized then that she wasn’t waiting for someone; she was waiting for a table, my table. Gulp. I went over to her and apologized profusely, and then, because I talk to everyone, I asked her name and where she’s from. Turns out Tanya from the Florida Catholic is enrolled in the same Church Up Close program. So we had breakfast, shared some stories and, hopefully, will have dinner tonight. And all because I stole her table.

I started the pilgrimage/tourist portion of my day with Mass at the Gesu (sorry, can’t figure out the accents on my machine). It was in Italian, so I couldn’t understand the homily. Except to know that it was looong because that translates into any language. Anyway, I didn’t mind because the church is just unbelievable. That’s a fairly lame photo below (my camera is awful and doesn’t do well inside), but no photo could do it justice. It must be seen. This church has the remains of St. Ignatius of Loyola (see next photo down) and the right arm of St. Francis Xavier. From there I did a quick tour of the rooms of St. Ignatius because it was getting ready to close for siesta. (Siesta puts a real crimp in my non-stop tour mode. All the churches close up shop for the afternoon. So I’ve missed a bunch. But not to worry, there’s always another church around the corner later on.) 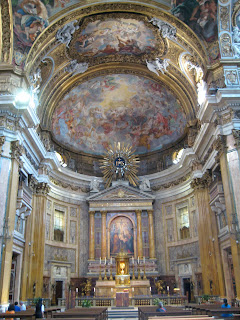 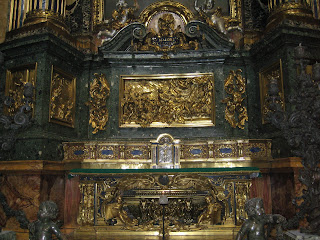 On to the Vittorio Emmanuele Monument, which Romans don’t like, and which American GIs nicknamed the “wedding cake.” I, on the other hand, thought it was rather impressive. With an impressive set of stairs to get to the top. But a great view once I got there. That’s it below, with the view. 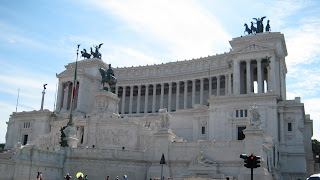 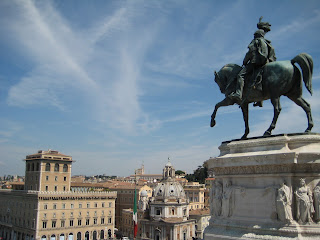 It’s not a long walk from the “wedding cake” to the Colosseum. In fact, you take the Imperial Way right up to the magnificent Colosseum. And, really, there is just no other way to describe standing in front of the Colosseum than magnificent. I did a tour led by someone who was remarkably anti-Christian. He just kept repeating over and over, every two minutes or so, “No Christians were killed here. Christians destroyed this place and took the marble to build churches.” Wait a minute, can we get a full accounting of the history here? Anyway, I met a lovely couple on tour — or before the tour when I was worried I was in the wrong place and so, once again, descended on some innocent strangers and started chatting them up. Turns out the husband heads up a division of family services (like our Catholic Charities) for the Archdiocese of Melbourne. Cool. Every time I talk to someone he or she turns out to work for the Church. Take that, cranky tour guide. Here’s the Colosseum. Wow. 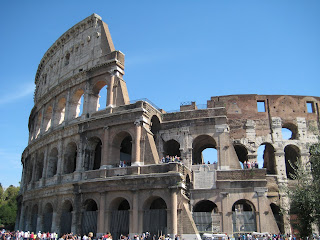 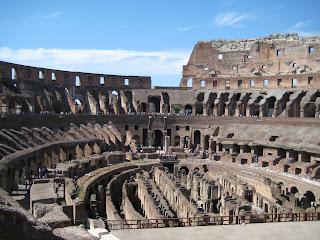 And then, since my ticket to the Colosseum also included entrance to the Roman Forum, I headed over there. Still no lunch, in case you didn’t notice. At this point I think I’ve spent more Euro on lighting votive candles in various churches than on food and wine combined. And that’s just sad. I’ll need to turn those numbers around quickly, starting tonight perhaps.

The Forum was awesome. Really. Again, I found the whole thing overwhelming. It’s so much to take in as you walk through ruins and see the remains of ancient structures and realize the magnitude of it all. See some photos of the Forum below. Before I left the Forum, I filled my water bottle from a water spout, one of many around Rome. (I did not drink right from the spout the way the Romans do, or the way Julia Roberts did in Eat, Pray Love, although I considered it.) Hope there’s no such thing as Cesar’s Revenge. Research beforehand said it was okay to do this and certainly many non-Italians were doing the same, but I took a gulp with more than a little apprehension. 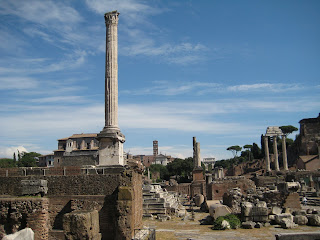 I ended my tour by walking through Campidoglio (that’s it below) and headed back to my hotel to rest before dinner tonight. But, alas, I spotted a familiar face in the hotel lobby and got sidetracked. Another Catholic journalist in Rome for the Church Up Close program. My dinner group is growing by the hour. 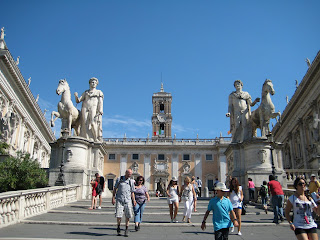