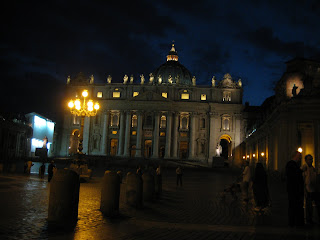 When I arrived in Rome, I expected to be awed by the sheer spectacle of the scenery. How can you walk though the Roman Forum or stand in the Colosseum or pray in St. Peter’s Basilica and not be bowled over by the magnitude of where you are and all that came before you? And then there is the beauty around every corner – the churches that house the Caravaggios and Berninis and Michelangelos as if they are just ordinary works of art in any neighborhood church. Rome really is a feast for the senses, even before you get to the fabulous food.

But more than the art and the food and the buildings, Rome will be seared into my memory because of the smaller moments of grace that seemed to come one after another as I made my way around the Eternal City. God really is in the details, especially when those details take the form of human encounters that make a place or a meal or a church come alive with a real spirit of Christian brotherhood and sisterhood.

During my recent 10-day visit to Rome, it was the chance encounters that made the overly scheduled trip the success that it was. Like the night two colleagues and I — after a busy day at the Sistine Chapel and the Vatican Museum — set out in search of a specific restaurant. We walked for more than a half hour only to find it closed. Then we went in the opposite direction to find yet another restaurant we’d heard about. We couldn’t find that one at all, and so we “settled” for La Pilotta, a small restaurant with a view of the dome of St. Peter’s. There at a long table in the center of the restaurant was a group of men, who were talking and laughing and eating. A good sign. Locals, we thought. We sat down and ordered pasta cooked to perfection and a house wine better than anything I’ve had at home. As we ate, the men at the next table began to sing at the top of their lungs, first in Italian and then in Polish.

They were seminarians from Belarus, there with their bishop and pastor. They were so filled with joy, and they sang extra loud once they heard our applause. We were sad to see them go as we shook hands and tried to communicate in parsed together Italian and English.

The next morning, I stood in Piazza San Pietro with thousands of other pilgrims waiting to get into the papal audience. I was lucky enough to get a special ticket, and ended up in the front row, next to a Jesuit priest and his sister. Since I was hours early, I got out my Magnificat and began to read the Scriptures for that day. A few minutes later the priest asked if I’d like to join him in Morning Prayer. And so we prayed amid the joyful noise all around us, and it was another grace-filled moment.

A little bit later, as Pope Benedict welcomed different groups in attendance, the camera panned to a group of young men. When the pope said their name, they stood up and started singing a familiar song. I looked at the jumbo video screen and saw the seminarians from the night before, our seminarians. Alone in a throng of thousands, in a city where I couldn’t speak the language, I felt at home and in close connection to those seminarians, making me realize that what I had thought was aimless wandering the previous night was really the road I needed to take to meet those particular people in that particular restaurant.

Yes, I saw the pope and reveled in the joy of the thousands of pilgrims who cheered and sang and prayed, but what will stand out most from that morning will be that time of shared prayer, that moment when strangers become friends, and that instant when a song resonating across the Pope Paul VI Hall made me feel as though I was part of a very large family. Which, of course, I am. A family of Catholics who cannot be separated by language or continents.