Giving away Thanksgiving: How much cheap stuff do we really need? 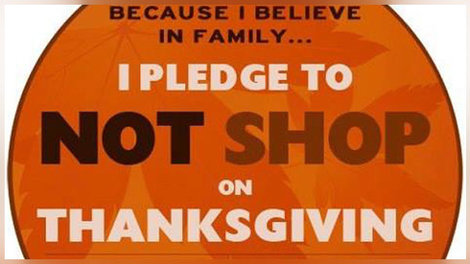 The thought of people shopping on Thanksgiving, working on Thanksgiving, fighting each other over cheap cell phones and cheaper TVs on Thanksgiving makes me so sad. Every time I sat down to write about it, no words came out because, really, what can I say to a world that values products over people, bargains over blessings, retail over relationships? One day. That’s all. Can we have just one day where we don’t have to be on the quest for more junk to fill our closets and drawers and basements to overflowing? I guess not.

I have never been a fan of Black Friday. Simply won’t do it. I don’t care how cheap you’re gonna make it, it’s not enough to get me to get in my car, fight someone for a parking spot, and then fight even harder not to get trampled in the crush. First of all, there is nothing at that mall I want even on a slow day. Throw in throngs of angry shoppers and, well, you couldn’t pay me to go there. Now, we’ve upped the ante, backing Black Friday into Thanksgiving and sapping all the joy from this beautiful holiday, one of my favorites, a holiday where we just give thanks and hang out together with people we may or may not get to see all that often. Pile some stuffing on top of that and it doesn’t get much better.

I came across this article on HuffPo today and decided that this guy hit the nail on the head when it comes to Black Thanksgiving. He says it better than I ever could:

For a while, Black Friday and Thanksgiving coexisted. We thanked God for His blessings on Thursday, and then jumped into the consumer mosh pit at Best Buy on Friday. But this Black Friday-Thanksgiving marriage was tenuous and rocky from the start. It was doomed to fail. Thanksgiving offers tradition, family and contentment; Black Friday offers smart phones at drastically reduced prices. In America, we all know who wins that battle. So Black Friday, like a black hole, violently expanded; it absorbed the light that surrounded it and sucked everything into its terrifying abyss, where all substance is torn to shreds and obliterated. Black Friday could not be contained to a mere 24 hours. It is Consumerism. It wants more. It always wants more. Nothing is sacred to it; nothing is valuable. So, now, Black Friday has eaten Thanksgiving alive. Thanksgiving let out a desperate cry as Black Friday devoured its soul, but we barely noticed. It’s hard to hear anything when you’re wrestling 4,000 other people for buy one get one free cargo shorts at Old Navy.

Many of the big chain retailers will be opening during, or before, dinner time on Thanksgiving. Walmart, Kmart, Target, Best Buy, Kohl’s — all among the many electing to cannibalize Thanksgiving. Kmart will be open starting at 6 a.m. on Thanksgiving morning, offering great Black Friday deals for 41 straight hours. This is fortunate because I often walk into Kmart and think, “you know, the stuff in here just isn’t cheap enough.”

November 24, 2022 • Give Us This Day
Meister Eckhart, the thirteenth-century German priest and mystic, famously wrote, “If the only prayer you ever say in your entire life is ‘thank you,’ it ...
Read More

Give marriage the place of importance it deserves

February 14, 2019 • Life Lines
On any given day, you’ll find me and Dennis running the gauntlet of modern family life. If you live it, you know it—or at least your own version of it. Early ...
Read More