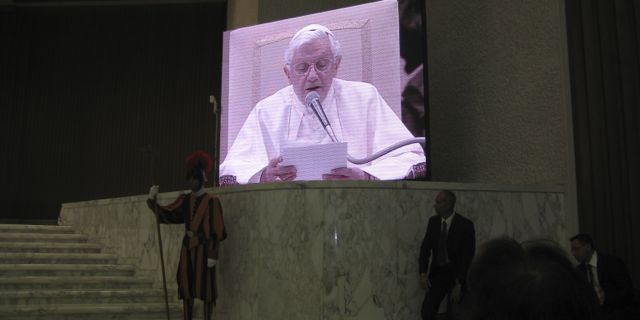 Here’s my reflection on Pope Benedict XVI, running in the March 10 issue of OSV Newsweekly:

I have to admit, I took myself by surprise when I burst into tears upon learning that Pope Benedict XVI had resigned. I have loved and respected this pope from day one, but I guess I never realized how he had worked his way into my heart just as Blessed Pope John Paul II had done before him. Where Pope John Paul captured the enthusiasm of my youth, Pope Benedict shored up the faith of my middle age.

My teenage son watched as I cried into my coffee that morning and asked why I was so upset. I wasn’t completely sure at first, but I think it came down to this: Pope Benedict has served as a visible reminder that God writes straight with crooked lines. He didn’t want the job, but the Spirit had other plans. Not only did Pope Benedict do what had to be done without complaint, he did it with a clear determination to put the mission of Christ before any personal mission. He did it by voluntarily relinquishing his position when it was time, demonstrating a kind of humility rarely seen in our power-hungry society. A beautiful study in contrasts.

Hanging beside my desk is the photo I snapped as Pope Benedict waved from the popemobile a few yards from where I stood in the press pen at St. Joseph’s Seminary, Dunwoodie, during his visit to New York in 2008. In my sacred space are the rosary beads blessed by Pope Benedict as I sat in the second row at a papal audience in 2010. On the bookshelf behind me are the powerful yet accessible encyclicals he wrote on love and hope. And while those tangible reminders will be nice to have around after he’s retreated to the cloister, the pope’s most lasting legacy may be the way he lived out the words of St. Paul: “When I am weak, then I am strong.”

January 28, 2017 • faith
I saw on Facebook two days ago that it was the tenth anniversary of the death of one very special parishioner of St. Thomas the Apostle Church in Delmar, ...
Read More

December 3, 2016 • Advent, faith, family
Lighting the Advent wreath each night for prayers before dinner has long been my family’s tradition. The flickering candlelight growing brighter with each ...
Read More