Pope Francis on the “leprosy of the papacy,” the leaven of love, and the feminine Church 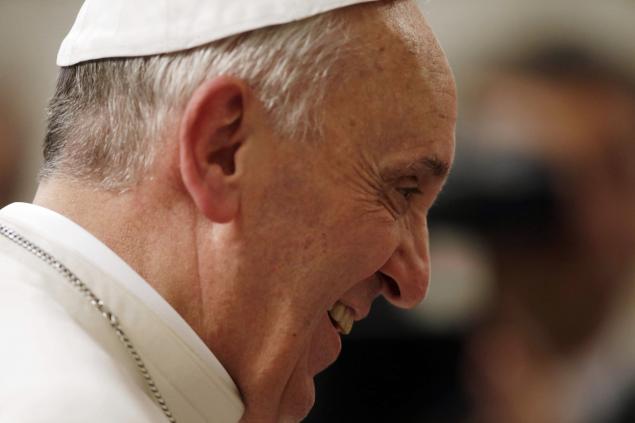 This time Pope Francis is talking with Italian newspaper La Repubblica. Second interview, just as fascinating, 4,600 words bearing the headline “Pope Francis: how the Church will change.” The pope called to set up the interview himself with Eugenio Scalfari, the atheist with whom he (now famously) exchanged letters.

I’m still reading, but here are a couple of snippets I need to share now (questions from Scalfari in bold, pope’s responses in regular type):

However, as we said, Jesus told us that love for one’s neighbor is equal to what we have for ourselves. So what many call narcissism is recognized as valid, positive, to the same extent as the other. We’ve talked a lot about this aspect.

“I don’t like the word narcissism”, the Pope said, “it indicates an excessive love for oneself and this is not good, it can produce serious damage not only to the soul of those affected but also in relationship with others, with the society in which one lives. The real trouble is that those most affected by this – which is actually a kind of mental disorder – are people who have a lot of power. Often bosses are narcissists”.

Many church leaders have been.

“You know what I think about this? Heads of the Church have often been narcissists, flattered and thrilled by their courtiers. The court is the leprosy of the papacy.”

It will be hard to top that quote, but how about this amazing exchange:

Do you feel touched by grace?

“No one can know that. Grace is not part of consciousness, it is the amount of light in our souls, not knowledge nor reason. Even you, without knowing it, could be touched by grace.”

Without faith? A non-believer?

I do not believe in the soul.

“You do not believe in it but you have one.”

And regarding the call of Christians and the Church today:

You Christians are now a minority. Even in Italy, which is known as the pope’s backyard. Practicing Catholics, according to some polls, are between 8 and 15 percent. Those who say they are Catholic but in fact are not very are about 20%. In the world, there are a billion Catholics or more, and with other Christian churches there are over a billion and a half, but the population of the planet is 6 or 7 billion people. There are certainly many of you, especially in Africa and Latin America, but you are a minority.

“We always have been but the issue today is not that. Personally I think that being a minority is actually a strength. We have to be a leavening of life and love and the leavening is infinitely smaller than the mass of fruits, flowers and trees that are born out of it. I believe I have already said that our goal is not to proselytize but to listen to needs, desires and disappointments, despair, hope. We must restore hope to young people, help the old, be open to the future, spread love. Be poor among the poor. We need to include the excluded and preach peace. Vatican II, inspired by Pope Paul VI and John, decided to look to the future with a modern spirit and to be open to modern culture. The Council Fathers knew that being open to modern culture meant religious ecumenism and dialogue with non-believers. But afterwards very little was done in that direction. I have the humility and ambition to want to do something.”

Now this is the pope asking a question, with the journalist responding in bold:

But now let me ask you a question: you, a secular non-believer in God, what do you believe in? You are a writer and a man of thought. You believe in something, you must have a dominant value. Don’t answer me with words like honesty, seeking, the vision of the common good, all important principles and values but that is not what I am asking. I am asking what you think is the essence of the world, indeed the universe. You must ask yourself, of course, like everyone else, who we are, where we come from, where we are going. Even children ask themselves these questions. And you?”

I am grateful for this question. The answer is this: I believe in Being, that is in the tissue from which forms, bodies arise.

The journalist makes a note of one of the pope’s final comments as the interview ends and he gets up to leave:

While walking his visitor to the door of the Vatican guesthouse, in a sudden aside the Pope told Scalfari that his reforms “will also discuss the role of women in the church,” reminding the interviewer that “the church is feminine.”