Being catholic with both a big and small “c” 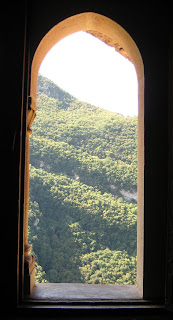 My recent post on experiencing Mass from a new perspective, garnered (as expected) some comments both here and on OSV Daily Take, and it got me thinking. So much so that I decided I needed to write another post, not just another comment.

Some of the reaction to my positive experience of attending Mass with the priest facing away from me suggested that I was looking for a return to the old ways, to the days of Latin Mass. Which is kind of funny because even as some — particularly on the OSV blog — were reacting to what appeared to be my traditionalism or conservatism, others were reacting on a completely different matter to what appeared to be my progressivism or liberalism. And all of it just made me chuckle.

I seem to confound people because I cannot be defined. I cannot be pigeon-holed. Not as a Catholic. Not as a political being. Not as a person. I do not — and will not — fit into someone else’s mold of what they think I am or should be. But it’s a little frightening how quickly people want to slap a label on someone, to create another person in their own image, or — as is too often the case — in the image of the thing they dislike or oppose. Can’t we all just get along?

What I find most beautiful about the Catholic faith is its diversity, its ability to include so many different styles and traditions and cultures and spiritualities under one roof. And my spiritual life reflects that diversity. I am as at home listening to Gregorian Chant as I am the St. Louis Jesuits or Christian pop music. I can see the beauty in attending a Mass where the priest is facing away from me or a Mass where I’ve helped make the Communion bread. I can just as easily fall in step beside people from Opus Dei as I can people from Sant’Egidio. My faith is not in any way limited by a certain style or tradition or a feeling that I must or must not do something in order to stay true to a particular vein of Catholicism. I am Catholic and I am catholic, with a small “c,” which, as you know, is part of our creed and reminds us of our call to be “universal.”

But, in this age of political — and I guess spiritual — purity, the middle road is often the one less traveled. I don’t fit in anywhere, really. My way is a blend of what I see as all the very best things of this amazing Catholic faith, as taught by our Church and practiced by our people. I am not afraid to venture into new territory to hear about or experience a new perspective, an old tradition, or a cutting-edge philosophy. I can pick up a set of Rosary beads or pray before an icon just the same. I can recite the foundational prayers of our faith or sit in the silence of centering prayer. All of it leads me to Jesus.

I would love to hear from others who find themselves in this middle ground, who appreciate and bask in the many different traditions of our faith, regardless of what “side” they fall on. There should be no sides here. Just the never-ending circle of God’s all-powerful love. Can I get an “Amen”?

January 28, 2017 • faith
I saw on Facebook two days ago that it was the tenth anniversary of the death of one very special parishioner of St. Thomas the Apostle Church in Delmar, ...
Read More

December 3, 2016 • Advent, faith, family
Lighting the Advent wreath each night for prayers before dinner has long been my family’s tradition. The flickering candlelight growing brighter with each ...
Read More