I think I met Jesus this morning 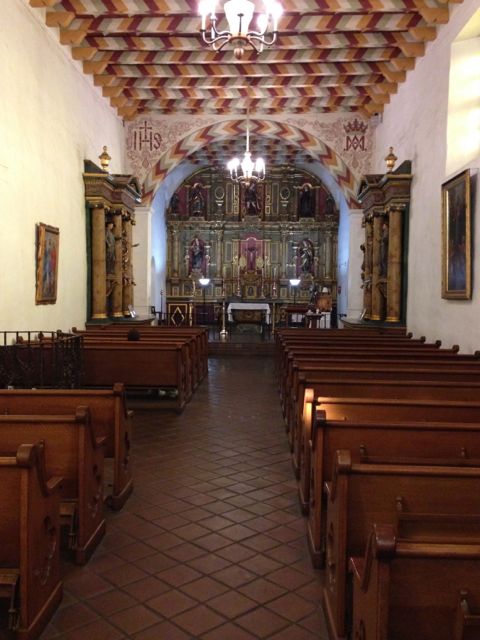 I walked down to the Mission District in San Francisco today to visit the original Mision San Francisco de Asis, more commonly known as Mission Dolores because it’s near the Creek of Sorrows, Arroyo de los Dolores. After wandering through a beautiful old cemetery and the newer basilica, built in the early 1900s, I found my way to the chapel (first building erected in San Francisco) just as people were leaving daily Mass.

I waited for everyone to clear out and then went closer to the altar to get some photos. That’s when I noticed an old woman sitting in a pew, skull cap pulled far down on her head, raggedy oversized clothes, big bag full of something at her side. She had all the markings of a homeless woman and our eyes met and we both smiled and I said hello and walked on by. But for some reason, just as I was about to leave, something — perhaps the echo of “Whatsoever you do…” that was running through my head at that moment —  told me to go back. And so I did.

I sat down in the pew right behind her, leaned in and asked how she was doing. She smiled again and asked me where I was from and how long I’d been in town and if I had children and a home. And I asked her if she had any family nearby. She said her 27-year-old grandson took care of her, but it was pretty clear that they must be struggling mightily because this woman looked like she had seen some very hard times in her life.

I told her my name was Mary and she loved that and said she would pray for me. (Her name is Zenobia, by the way, in case you’d like to send up some prayers for her. I think she could use them.) And then we talked a while more — about the troubles in our world, about the need for peace and the need for prayers to get that peace. She pulled out a prayer card of St. Jude and told me to take it. Then she held out a little vial of oil from a nearby shrine to St. Jude and told me to bless myself with it. I did what she told me, all the while feeling that I was in the presence of someone very special. We finally said goodbye, promising to pray for each other, and as I walked away my mind kept coming back to Mother Teresa’s challenge to see Jesus in the “distressing disguise of the poor.”

A few minutes later, as I stood in the gift shop, waiting to buy a beautiful wood carving from Mexico, Zenobia came in, saw me, and told the shop manager, “This is Mary from New York!” Then she asked to borrow the phone, and the woman at the register ushered her behind the counter. She came back to me once more, took my hand for a minute, and then left. I asked the woman ringing me up about Zenobia, and she said, “She is the real deal,” and went on to tell me how holy and good and strong Zenobia is and how she has an “interesting effect” on people. And I knew just what she meant.

So I thought I was doing a good deed by sitting down with a poor woman in a pew, but it turns out I was the one who received the greater gift today. I set out to see a church, but I ended up seeing Jesus.

Where is the beauty in your world?

June 15, 2022 • Everyday Divine
As I was sipping coffee on the deck this morning, phone in hand, crossword puzzle in front of me, I suddenly stopped and looked up. In that moment, ...
Read More

October 13, 2020 • Yoga
Ever since I first stepped onto a mat in the late 1980s, I've been a full-fledged yoga believer. I loved the power of the physical poses and the way they ...
Read More

A mountain retreat: Find your stillpoint

August 19, 2020 • Everyday Divine
After months of wondering whether my retreat would be on or off due to COVID-19, I am happy to report that it is ON, and Pyramid Life Center is ready to ...
Read More