Honesty…is such a lonely word 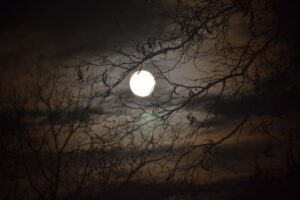 You will often hear me talk about being in “darkness,” and almost always those posts happily wrap up with a light at the end of the tunnel, a glimmer of hope, a shimmer of the Spirit. Something. Anything. But lately, to be perfectly honest, it’s just been darkness. I know that from the outside — and even from the inside — I clearly have nothing in the world to feel dark about. But there it is. Enveloping. Suffocating. Punishing. Frightening.

Maybe it was a perfect storm, a combination of stress over work, unhappiness over physical stuff, craziness with the kids’ schedules, dryness in the spiritual realm, and then, the icing on the cake, the death of my grandmother in the midst of the holiday season. So perhaps there is a reason for the darkness, but, even so, it shouldn’t be quite so lights-out dark over here. Really. I can recognize that objectively, but, boy, is it hard to shake it off from where I’m standing.

I told someone yesterday that if you were ask people who know me (or think they know me) how I am, they’d probably offer you a fairly upbeat litany: very chatty, mostly smiley, sometimes funny, usually sarcastic, often goofy, but overall happy. That is the armor I put on to go out into the world, whether it’s at a school meeting, in the coffee shop, over the phone, or on Facebook. But what lives under the armor here in the basement office is an entirely different scenario. And I know I’m not alone, so I thought it was time to talk about it, put it all out there, because this place, this blog, is totally worthless if it’s not completely honest. But, as the song says, “Honesty is such a lonely word.” And a hard word, and a hard practice, because being honest means being vulnerable and being vulnerable means allowing your heart to be broken or at least a little scarred and your ego to be buffeted and your sense of self to be hung out to dry, depending on the reaction.

At just about this point in writing my blog post today, I signed onto Facebook and found another friend writing a similar post but with a different twist over at The Glass House Retreat. Some of it sounded so familiar I felt like she must have been taking transcription, right from my brain to her hands. She wrote:

We ALL put on award worthy performances for the public. We smile, though our heart is breaking. We get dressed and put one foot in front of the other even when the very last thing we want to do is leave the cocoon of our blankets. We put on mascara, even though we will cry. We go out for meals with friends. We toast each other because we have gotten through another day.

Yes, much of life is a performance. Dare I say almost ALL of Facebook is a performance, not just for me but for everyone out there. Best foot — photo, video, life news, vacation — forward almost all the time, with only rare glimpses into our pain and struggle. Sometimes I verge on leaving Facebook for that very reason, too much surface and not enough depth, too much pizazz and not enough honesty. I like deep. I like honest. I like real. But I stay because of the virtual connections that have given me real friends — like Maggie, the blogger I mentioned above, whom I’ve never met but feel like I know — or have renewed old friendships with people who are so dear to me that I can’t imagine not seeing their smiling faces scrolling across my computer screen each day.

On dark days, sometimes those little blips of light flashing from my laptop are enough to chase away the shadows. Of course, on other days, some comments on my thread — even if they are painfully honest, or maybe because they are painfully honest — are enough to kick me right back down into the pit. So I think there has to be balance and awareness. Know when to hold ’em; know when to fold ’em, I guess. I’m holding ’em for now, although I always keep the possibility of folding and disappearing for a while as a back-up plan. And that’s okay. Sometimes we all need to disappear for a while. Well, at least those of us cut from this particular cloth.

When I commented over on Maggie’s post today, I said this:

I have not been able to write because I have been frozen by a grief that really has no direct or obvious source. That’s why my blog has been dry for a while. I usually cope through writing, so to find myself without words is a grief all of its own.

Honestly. I have been aching to write here, to share with you, but if I can’t be totally honest, I’d rather not be here at all. So there you have it. I can’t write, can’t pray, can’t do yoga, can’t eat right, can’t sleep, can’t laugh, can’t anything, and yet life requires me to find a way to do all those things in spite of myself. Maybe showing up here again is a first step in doing just that, a leap toward the light even when I can’t see the other side.

And now, here is the song, which I especially love because it is a raspier, rougher, realer version than the original: