Pope Francis and seeing the forest for the trees 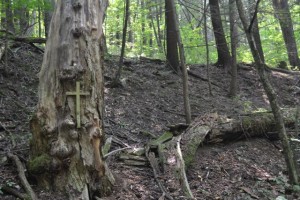 As I watched the events in Rio unfold throughout the World Youth Day celebration, I found myself tearing up over photos of three million people crammed on a beach just to be near and hear Pope Francis, over the shot of a little boy breaking through security to whisper into the pope’s ear that he wants to be a priest, over the many beautiful things Pope Francis said that give me renewed hope. And every once in a while I’d think, I should blog on that, but I wouldn’t because a new thing would come along so quickly. But then yesterday I read the one line that made me stop and say, YES! And I knew I had to blog about it, but I needed to let it sink in more fully.

“As always, the ones who aren’t saints make the most noise … a single tree falling makes a sound, but a whole forest growing doesn’t,”  Pope Francis said in response to a question about the Curia. (Via John Allen’s story in NCR.)

To me that one line sums up so much of what I often try to tell people who aren’t Catholic or who can’t see beyond the headlines that constantly remind us of all those single trees falling, all the human errors, weaknesses, and, sometimes outright crimes that steal the spotlight and keep us from seeing all the beautiful trees silently but powerfully growing in a forest of compassion, generosity, and pure love.

That’s the reality of the Catholic faith and the Catholic Church. There is so much goodness, so much truly Gospel-centered work going on without headlines or stories or recognition of any kind in bustling cities and remote villages on every continent. Religious sisters, brothers, lay people, and priests who live in poverty alongside the people they serve. People who bring life-saving programs to places where there is no clean water or no health care or no schools or no food. And not as an NGO but as a mission of compassion and love, grounded in the teachings of Jesus and built on the tradition of the faith.

In other parts of my professional life, I get to write about many of the “trees” that make up our Catholic forest, and I am in awe of and humbled by what other people are willing to do to make the world better for their brothers and sisters. Although I have always known it, now every time I see a headline that gets me disheartened I will have that image of a falling tree in my head, and I will turn my gaze to focus on the whole forest growing instead.