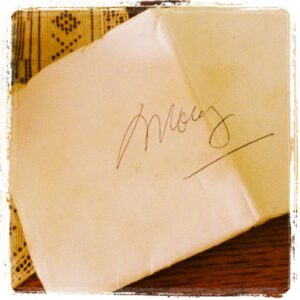 I decided to clean out some dresser drawers last weekend, and mixed in with the shirts I no longer wear and the silks scarves I forgot I had were little pieces of my past. Noah’s handprint in clay from when he was just a year old. A puffy foam heart necklace made by Chiara for a Mother’s Day gone by. Olivia’s old letters to Santa and one to the Tooth Fairy demanding to know what she does with all those teeth anyway.

As I sorted and stored, dusted and dumped, I turned up one memory after another, moments I’d lost that were given back to me just briefly in the guise of a de-cluttering project. And then I stuck my hand into an old silk travel jewelry bag I’d purchased when I was in China 30 years ago, and I pulled out a torn and yellowed envelope. My first name was scrawled across the front in familiar handwriting, my mother’s handwriting, the mother I haven’t seen or heard or smelled or touched in almost 26 years. And I felt a little stunned, like the wind had been knocked out of me for a second or two.

I guess I knew I had this letter. After all I had the forethought to store it inside a plastic bag inside a silk bag with some of my old rings and charms, someplace hidden and protected. But, to be honest, I totally forgot that this letter existed. I have very little in the way of personal mementos belonging to my mother—a necklace, an outdated Sunday missal, the beautiful mahogany wall unit that graced the living room of my childhood home and held some of her own treasures and memories. But those are all “things,” material belongings that really don’t convey much meaning. This letter was another story, like a stolen conversation, a voice from my past.

As I unfolded the letter, I didn’t even need to read a word to feel the connection. Just holding the pages my mother once held and seeing her handwriting and “Mom” signed at the bottom was enough, but as I read on I was so grateful for words I remembered now but had long ago lost sight of. Although the letter wasn’t dated, I could tell from its content that my mother wrote it when I was older—maybe in college or just after, and it was written on my birthday. My mother wrote more of these birthday letters, but this is the only one that survived.

I used to write similar birthday letters to Noah when he was young, and I have journals for each of my three children, not baby books (we have those, too), but actual diary-type books where I write to them about being their mom. Noah’s book has the most entries, Olivia’s just a few, and Chiara’s only one or two. I guess somewhere in my heart and head I remembered how much I loved those notes from my mother and wanted to give my kids the same thing, but life got in the way, as it often does. And while there’s a case to be made for living life in the moment rather than taking notes about it on paper after the fact, finding that letter made me realize that these little glimpses into the past can resonate in powerful ways.

That short handwritten note took me back to a time I’d lost, a love and friendship snatched away too soon. It reminded me that my mother was everything I remembered her to be, not some figment of a child’s imagination. With every passing year, it has become easier and easier to imagine—to assume—that perhaps I had sugar-coated the image of my mother and the relationship we shared. This lost letter proved to me once again that it was all so very real and beautiful.

So excuse me while I put pen to paper and leave some memories for my children.