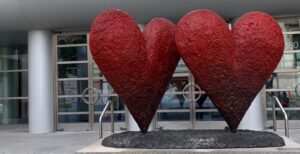 When I was leaving my gynecologist’s office recently, I exited the building with a younger couple leaving the same practice. I guessed that they likely were there for a pregnancy checkup and smiled at the memories of those days in my own life. As we all crossed the road, we arrived at the door to the parking garage simultaneous to a woman in a wheelchair who was being pushed by an aide. The woman, who had severe disabilities, was trying to communicate, or maybe she was in pain, and her cries were anguished and loud and continuous.

The couple ahead of me looked at one another, and I saw the young woman put her hand to her face and double over. I wondered if she found the whole scene too upsetting, or maybe she was sick. When we entered the parking garage, the woman in the wheelchair and her aide headed to the elevator, while the couple and I moved toward the stairs. As they rounded the top stair and turned on the landing, we were facing each other. It was at the point I realized the woman wasn’t upset; she was laughing so hard she could not contain herself. She was laughing at the woman in the wheelchair.

I felt anger rising and debated saying something but held back, not wanting to get into a contentious conversation with strangers in a stairwell. I could see that her partner was not laughing and looked uncomfortable. They exited at the second floor, the woman still laughing uncontrollably, while I continued to the roof level. When I arrived at the top of the stairs, the woman in the wheelchair was being escorted toward a van. She was still crying out, and as I watched them move across the lot, I felt tears coming. Tears for the cruelty of our world today. Tears for the woman in the wheelchair, whose suffering is greater than anything I can understand. Tears for the woman pushing the wheelchair, smiling and talking so gently. Tears for the laughing woman, who perhaps didn’t know how to respond to a such a difficult situation and so opted for something terribly inhumane out of her own fear.

For as long as I can remember, when people saw others suffering, they would say to themselves, “There but for the grace of God go I.” There was a recognition that none of us do anything to earn our place or condition in this world and should, therefore, look with kindness on—and in solidarity with—those who have been asked to shoulder a heavier burden. Have we forgotten that, or is it buried under the avalanche of ridicule and bullying and intolerance that make up social interaction today?

When we close off our hearts and minds to those whose situations scare us or make us uncomfortable, the only ones we cheat are ourselves. I have to remind myself that this truth applies to all the women in the parking garage that day.

It is not enough to feel compassion toward the woman in the wheelchair and the woman who cared for her. Despite everything inside me that wants to fight against it, the Gospel calls me to have compassion for the woman who laughed as well. She has a condition that doesn’t require a wheelchair but is clearly much more debilitating. And I can only hope that those women looked at me with compassion for whatever fault or flaw they might have spotted but to which I am oblivious.

We move through this world viewing everything and everyone through the prism of our own experience, but Jesus tells us to throw away the prism and see everyone in the same light, the light of love. These days, that can feel nearly impossible, but it just might be true that only love can save the world.

This column originally appeared in the Nov. 4, 2020, issue of Catholic New York.