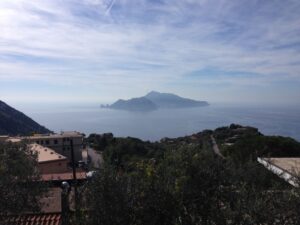 A little more than five years ago, I stood on land owned by distant DeTurris relatives in Massa Lubrense, Italy, the birthplace of my paternal grandfather, and looked out at the Isle of Capri in the distance. (Seen in the photo here.) To say it was breathtaking is the understatement of the century. On a boat ride across the Bay of Naples, I imagined my grandfather and his family leaving that same port on a steamer headed toward New York. All the while I kept wondering how difficult their lives must have been to make them leave behind that picture-postcard scene and head into the frightening unknown.

Of course, my Irish relatives did the same, escaping oppression and famine only to land in a place where “Irish Need Not Apply.” Both the Irish and the Italians were considered less-than by earlier immigrants to this nation, whose birth we celebrate this month. And to this day, despite progressive attitudes in many other areas, it is still socially acceptable to joke about Italians as mobsters and Irish as drunks. Because we humans seem to find our power in demeaning others rather than lifting each other up.

The players may be different today, but the reality is the same. People who look or speak or worship differently from us are “other,” and in finding a common enemy—someone we imagine threatens the status quo—we seek to strengthen our own position and power. At least, that’s how the world sees it, but as people of the Gospel, the Way of Jesus Christ, we know better, or at least we’re supposed to know better.

I feel heartbroken as I look at the division and hatred that seems to grow with each passing day in our country. Like tentacles reaching out in every direction, it threatens to choke out everything we hold dear if each and every one of us is not willing to take a hard look at ourselves and a compassionate look at our neighbors. It is so easy to see someone at work, down the street, in a store and think we know that person’s story. They’ve got it made. Look at that house, that car, that job, that family, that vacation. Easy street. But we all have stories, a history that has shaped us over generations.

My Italian grandfather was an upholsterer, with a ridiculous commute from Brooklyn to Haverstraw long before there was a Palisades Parkway. My Irish grandfather was a machinist in the Dexter Paper Company in Pearl River, even though he had aced all his Regents exams and wanted to go to college. Their struggles are glossed over now by subsequent generations whose lives seem filled with relative ease, but we all know (or hope) that 50 or 100 years down the road, God willing, our grandchildren and great-grandchildren will look back at our own struggles and wonder how we did what we did to get through the challenges life threw us.

If only we could look into the eyes of every person we meet and recognize the unseen struggles that live there. Our problems begin when we forget that others suffer, too, and think that we are the only ones forced to deal with challenges, injustice, loss, heartbreak.

The day I sat at a table laden with homemade pasta, just-caught seafood and local wine as I looked out over the Mediterranean Sea, I was overcome by the reality of the sacrifices that were made by the people before me so that I might have a better life—even though there would be no “I” for many years to come. Because we don’t always sacrifice for our own good; we sacrifice for the good of others, for those who are not yet born, for the future, and we are called to do that as one nation, under God, indivisible, with liberty and justice for all.

This column originally appeared in the July 15, 2020, issue of Catholic New York.