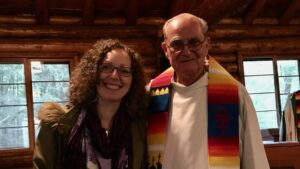 I first got to know Sister Johanne McCarthy, C.S.J., about 18 months ago when she wrote to complain that our Albany diocesan newspaper wasn’t giving religious sisters the same treatment priests and deacons received on the obituary pages. I had to agree with her. It certainly seemed that the sisters were getting short-changed. So I joined her in advocating for equality in the obits, and that was the beginning of a beautiful-but-too-brief friendship.

After the obit issue was put to rest, Sister Johanne wrote me notes or left me voicemails just to say hello. She invited me to have lunch with her and another Sister of Saint Joseph, and, oh, what a joyful lunch it was. Sister Johanne was so full of life and laughter and, well, chutzpah. My kind of gal. When I left, I promised to return. But, as is often the case, life and work got in the way. We spoke a few times. I dropped her a note now and then, and I continued to remind myself to set a date for a return visit. And then, just last week, I scrolled through my Facebook feed and saw the Sisters of Saint Joseph of Carondelet had posted Sister Johanne’s obituary.

I was heartbroken, and oh so mad at myself for not following through on my intentions to visit. How often does that happen? That we plan to do something and then life gets in the way and we realize only too late that we’ll never get the chance to make good. I experienced a bit of the same when Father Tom Connery, a priest of the Diocese of Albany, was swept away in the historic raging flood waters in upstate New York in late October.

I had met Father Connery years ago when I was the speaker at a Magnificat breakfast and we were seated next to each other. We got to chatting and, well, he had me at Merton. He actually knew Thomas Merton, one of my spiritual heroes. They met when Father Connery was serving in Alaska and Merton was looking for a location for a hermitage.

A few months after that breakfast meeting, I asked Father Connery to celebrate Mass at a retreat I was leading at Pyramid Life Center in the Adirondacks. He was happy to oblige, delivering a beautiful homily about silence and faith and Merton, all while wearing a stole given to him by Blessed Stanley Rother, who had been his classmate and friend. I asked Father Connery to say Mass at the Merton in the Mountains retreat I gave in September this year. He had a wedding and it didn’t work out, but I still have the voicemail he left me saying how he hoped it would go well and he looked forward to talking to me. I never called him back, and now it’s too late.

Just this week I began listening to the audio book of “On Being Human” by Jennifer Pastiloff. Her words echoed the messages brought home by these recent losses. Don’t wait. Say yes. You’re not that busy. Go, visit, call, write.

“…when you listen to people and when you show up, like really show up, there is beauty everywhere. And when you start noticing it, you can’t unsee it, ” she writes. She calls this “beauty hunting.” What a lovely way to look at life — as one unending series of beauties just waiting to be discovered if only we say yes when we would typically say no.

In this season of family and friends and celebration, remember being busy is really a gift. Why not be busy and filled with life and joy and adventure rather than stay home and scroll through your social media feed or stare at the TV or sleep. Call someone today. Set a date and visit that friend. Hug the person sitting on the couch with you right now. Do it. Hunt for beauty where you are before it’s gone.

This column originally appeared in the Dec. 4, 2019, issue of Catholic New York.