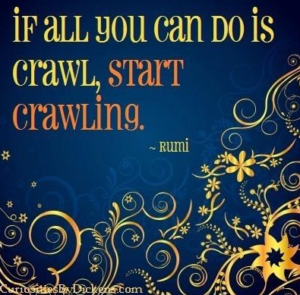 A willingness to be vulnerable in front of other people is probably one of my best qualities. I know that sounds like a self-deprecating put-down, and for the longest time—most of my life—I would have agreed with you. In a world where the get-ahead motto tends to be, “Never let them see you sweat,” I have always been someone who is inclined to let people in on my weak spots. I tend to share more than self-preservation might recommend, to take personal or professional risks that might seem risky and to let others know, when they are broken or discouraged or doubting, that I’ve been there or worse, sharing the story of some fiasco that is sure to make them feel better about themselves and maybe even give them a laugh.

But being vulnerable isn’t valued in our society. It’s a habit or virtue that’s denigrated and denied, ignored and ill-advised—until you reach a point in your life where you realize that vulnerability is where all the good stuff starts to happen. For a couple of years, I had a variation of the famous Samuel Beckett quote on my desk at work: “Ever tried. Ever failed. No matter. Try again. Fail again. Fail better.” People would often stop and read it a few times, sure they must be missing something. Why would I promote failure? Because it is only through a willingness to risk failure over and over that we move forward. Like it or not, it is how we learn best; it is how we become who God created us to be. Otherwise, we’re like the fearful tenant in the parable who buries his talent rather than take a chance and do something to multiply and maximize it. He thought he was choosing best in choosing safety, which turned out to be the most dangerous choice of all.

In a TED talk on “Listening to Shame,” bestselling author Brené Brown discusses vulnerability and how it is a measure of strength rather than weakness. “Vulnerability is the birthplace of innovation, creativity and courage,” she says.

We all know the stories of famous inventors and authors who put that theory to the test: Dr. Seuss rejected 27 times; years of failed attempts by the Wright Brothers before flight was possible; Thomas Edison’s 1,000+ failed attempts at inventing the light bulb; J.K. Rowling’s years as a single mother on welfare before the dazzling success of Harry Potter.

Edison once said, “Many of life’s failures are experienced by people who did not realize how close they were to success when they gave up.” He saw every “failure” as another step toward his goal. In a commencement speech she gave at Harvard University, Rowling said: “It is impossible to live without failing at something, unless you live so cautiously that you might as well not have lived at all—in which case you fail by default.”

It’s not easy to think that way, and it’s even more difficult to live that way. We want to stay on solid ground where we know the route and the outcome beforehand, or so we think. We can’t stand the thought of the perceived humiliation that might come with failure or the I-told-you-so comments from the peanut gallery, and so we choose to be a smaller version of ourselves than we are called to be.

As we head toward the new year, with its push for self-improvement plans that typically don’t deliver, why not approach the months ahead with Samuel Beckett’s word playing on endless loop: “Try again. Fail again. Fail better.” Don’t beat yourself up when you “fail”—a word we too often apply to even the most minor mistakes or infractions—but rather reflect on and revel in your newest discoveries. Like Edison you’ll be figuring out 10,000 ways that don’t work. Eventually, if you invest your talents rather than bury them, you’ll hit on success and realize that failure led you exactly where you needed to be.

This column originally appeared in the Dec. 5, 2018, issue of Catholic New York.