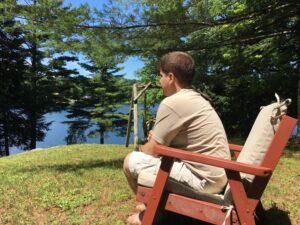 Dennis and I were sitting around the kitchen table one morning talking with our son, Noah, who is home from college for the summer and working full time for the Diocese of Albany. Although he lives away more than he lives at home these days, when he does return for visits or extended stays, Dennis and I tend to revert to the parenting mode we favored when he was younger.

We started making “helpful” suggestions about things Noah could be doing differently in his social life, his work life, his life in general. He listened patiently, reminding us ever so gently at one point that he was doing pretty well (really well, actually) in terms of academics and everything else.

Later that same day, Dennis and I were hiking at a nearby nature preserve, when I had a revelation. There’s something about immersing myself in nature that clears my head. Suddenly, in my mind’s eye, it was 17 years ago, when Noah was only 3 and had just started attending a Montessori pre-school near our home in Austin, Texas. Although we loved everything about the Montessori method, we would get frustrated when, day after day, every time we asked Noah what he had done at school, the answer would be something along the lines of, “I did hand-washing work.”

Dennis and I—fully in first-child parenting mode—would roll our eyes and obsess over what seemed like a total waste of Noah’s time and our money. How much are we paying for him to wash his hands? Why isn’t he taking advantage of the more interesting “work” that was available? We reminded Noah that when we had been at the open house, we saw a really cool farmhouse over in the corner. We suggested he play with that when he returned to school.

When we picked Noah up after his four-hour stint the next day, we asked how things went, waiting hopefully for news of the farmhouse. Looking a little forlorn for a boy of 3, he told us he had tried to play with the farmhouse, but the teacher told him he wasn’t ready for that work yet. That was for the older children. And so, poor Noah took the correction that rightly belonged to his parents.

I recalled all of this out loud to Dennis as we stood on a wooden bridge, the words tumbling from my mouth like the water rushing over the falls below us. “This is just like what we did to Noah with Austin Montessori,” I said, somewhat stunned by my own realization. We think we know better, but sometimes our children really do know what’s best for themselves, whether they are 3 years old or nearing 21. They live in their own world, in their own skin, and if we’ve done our job as parents, they know what they need to do—or not do.

Both Noah and Olivia, 17, are navigating the difficult path of young adulthood quite nicely, not only acing their schoolwork but steering clear of the pitfalls and problems that often plague so many high school and college kids. It’s time for us to start trusting that, while they might need some occasional guidance and figurative hand-holding now and then, they really do know how to handle the day-to-day rhythm of their own life circumstances better than we do at this point.

A few nights later, with our family gathered around the kitchen table again, we explained to the kids (including Chiara, who at 12 has many years of parental instruction ahead) that we recognize our own misguided attempts to try to live their lives for them out of our own fears for their futures.

We can’t prevent the inevitable failures and heartaches—theirs or our own. And that’s OK, because we only succeed by failing now and then. We’ll all get to the farmhouse when the timing is right.

This column originally appeared in the Aug. 3, 2017, issue of Catholic New York.