On building tribes and learning not to fly too low… 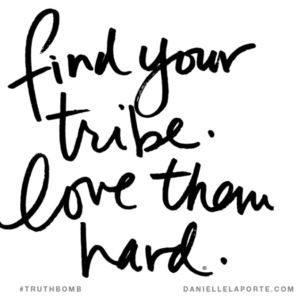 Not long after my first post went up, I scrolled through FB and found an interview with Seth Godin and Krista Tippett of On Being called “We Choose Our Own Tribes.” Seriously. How cool is that?!? I’ll link to the full interview at the bottom of this post, in case you’d like to hear everything he had to say, but here’s the part I thought was important for all of us in the Cravings Tribe to hear (Italics is Krista Tippett; regular font is Seth Godin; bold is mine):

I want to bring in the word “tribes” that you use, because that’s another way you’re using a word that we associate with something primitive that we think — that we thought modernity was about outgrowing.

You are actually really affirming that it’s not, you know, identity doesn’t matter less it matters as much or more. But you’re saying that now it’s not just a matter of blood and lineage that’s given to you. It’s something we create and choose. We choose who and what we belong to. It’s not just about survival. It’s about connection and flourishing.

So, you know, in the desert or the jungle, the tribe was defined by geography alone. That you were in the tribe based on where you were born. And then if we fast forward to, I don’t know, Mark Twain, Mark Twain would show up in a city and a thousand people would come to hear him speak. And everyone who came was in his tribe. They were in the tribe of slightly satirical, slightly jaundiced people who were also intellectuals who could engage with him. And he had never met them before, but within minutes, they were part of a congruent group who understood each other.

And so if we fast forward to today, you can take someone who hangs out in the East Village or Manhattan who has 27 tattoos, they go to Amsterdam, they can find someone in Amsterdam who talks their language and acts like them, because they’ve chosen the same set of things that excite them, and that they believe in. And we divide tribes as small a group as we want. But what the Internet has done has meant that we don’t have to get on a plane anymore to meet strangers who are like us. That the Linux operating system, which is on a billion computers around the world, was written by a group of strangers who have never met who are part of the same tribe. And so the challenge of our future is to say, are we going to connect and amplify positive tribes that want to make things better for all of us? Or are we going to degrade to warring tribes that are willing to bring other groups down just so they can get ahead?

The myth of Icarus is one that you’ve been thinking about a lot lately, and bringing into your work. And I think you’ve been talking about what that holds for you. But explicitly say — you’ve called it “the Icarus deception.” What does that mean to you?

So if you and I had been sitting around just after the Dark Ages and heard the story of Icarus — what we would have heard is this: that Daedalus said to his son two things — one, put these wings on but don’t fly too close to the sun because it’s too hot up there and the wax will melt. But more important, son, do not fly too low, do not fly too close to the sea, because the mist and the water will weigh down the wings and you will surely perish. And that was the story until Andrew Carnegie and the rest of the industrialists made it really clear that it was a bad idea. And they left out the part about “don’t fly too low.” And that’s not what we were taught, and the books changed, and suddenly the Icarus story we all grew up with is, “Don’t fly too high. Avoid hubris.”