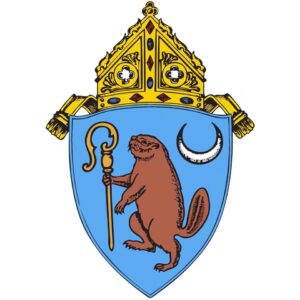 Big news on the work front for me. On Friday, Bishop Edward B. Scharfenberger of Albany appointed me Director of Communications for the Diocese of Albany. I am so honored — and so thrilled. It’s funny how things come to us when we are ready for them, when we need them or want them but don’t necessarily expect them. If you had told me last year at this time that I would be here today, I would have looked at you funny, and yet here I am and it all seems to make perfect sense. It’s as though my entire career was training for this particular job. I couldn’t imagine a better fit. Over the 30 past years I have served in diocesan communications offices, as a reporter and editor at diocesan and national Catholic newspapers, as a guest and host on Catholic radio and TV shows. I have immersed myself in writing books about spirituality, Church teaching and all things Catholic. And now it all comes together in one job.

Although I will be full time with the Diocese of Albany, I will continue to do my spiritual writing. I can’t give that up. Writing is a bit like breathing for me. I think I would wither and die without it, so I’ll find a way to do at least a little of that. I will continue my monthly Life Lines column, which appears in Catholic New York and the Catholic Spirit (Metuchen), and I will continue to write for Give Us This Day. In fact, I have a book of Lenten reflections coming out from Liturgical Press in November, and I am beginning work on another book of spiritual reflections for release in 2017.

And I will continue to lead retreats and pilgrimages now and then. I already have a 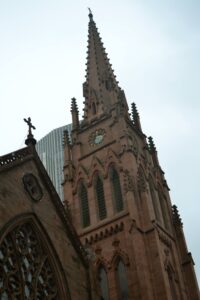 fantastic Holy Year of Mercy Food & Faith pilgrimage to Italy scheduled for May 15-26, 2016. We are going from Rome and Castel Gandolfo to Orvieto, Assisi, Siena, Bologna, the Emilia-Romagna region, Padua and Venice. It promises to be a trip to remember. You can read more about it HERE. I’ll be back with a separate post on that soon. I promise.

So, please, send a prayer my way as I begin this new chapter in my life. I truly believe the Spirit was at work in all of this and that this is exactly where God wants me to be right now. Although I have been doing social and digital media for the diocese part time for the past five months, I am looking forward to kicking it up a notch and using my background and experience to help the diocese spread the Good News in new ways. (P.S. That’s our diocesan crest up there on the left. The beaver is a symbol of Albany, which was once called Beverwyck — “Beaver” — and the crosier is a symbol of the Office of Bishop. The crescent moon and the blue represent the Blessed Mother, patroness of the diocese under the title of the Immaculate Conception. And that’s our cathedral on the right.)

If you’re interested, here’s the press release announcing my appointment and explaining Bishop Scharfenberger’s vision for my office:

Recognizing the power and potential of the changing media landscape, Bishop Edward B. Scharfenberger today announced a new vision for the Diocese of Albany’s Office of Communications. To lead that effort, he has appointed Mary DeTurris Poust, currently diocesan Consultant for Digital and Social Media, as Director of Communications, effective Sept. 3. She replaces Kenneth J. Goldfarb, who has served in that position since 2002. The appointment also follows the retirement of Father Kenneth J. Doyle from his position as Chancellor for Public Information.

The restructured Office of Communications will not only include public information and media relations but social and digital media and oversight of The Evangelist, the weekly newspaper of the diocese, bringing together under one roof the diocese’s varied communications tools.

“We want to use our communications proactively to announce and spread the Gospel and to equip not only the Catholic population but the general public with accurate, timely and helpful information about the Church and the activities of the diocese and our parishes,” said Bishop Scharfenberger. “We need to use every means available to do that, and while traditional media, such as The Evangelist, remains critical to our communication and evangelization efforts, we must take advantage of the many new media platforms that allow us to broaden our reach and engage more Catholics in the New Evangelization.”

The diocese joined social media in April, when it launched Facebook pages and Twitter accounts for both the diocese and the bishop. Since then, the number of followers has been on the rise as the diocese begins to engage the rapidly increasing local and global Catholic community that exists online.

“As a long-time journalist, I value the power of the printed word, but 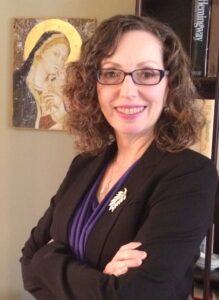 there is no denying the equal power of new media to reach untapped populations that are hungry for a relationship with God,” said Ms. DeTurris Poust. “With both traditional and new media working together under the newly revamped Communications Office, we will be able to better respond to the needs of our people and the needs of our times. I’m grateful to Bishop Scharfenberger for his vision and for the confidence he’s shown in me to help him implement that plan.”

Ms. DeTurris Poust has been working in Catholic media for more than 30 years and has written seven books on Catholic spirituality and teaching and published hundreds of articles in both Catholic and secular newspapers and magazines on national, regional, and local levels. The former managing editor of Catholic New York newspaper, she is regular contributor to Catholic radio and cable, and a social media expert who has spoken about the importance of using new media as a tool for evangelization to the United States Conference of Catholic Bishops (USCCB) in 2012 and World Communications Day in Brooklyn in 2014.

Father Doyle, former editor of The Evangelist, spokesman for the USCCB, and Rome Bureau Chief for Catholic News Service, has served as Chancellor for Public Information since 2000. He will continue as pastor of Mater Christi Parish in Albany and will continue to write his nationally syndicated “Question Corner” column, which runs in The Evangelist, for Catholic News Service. Mr. Goldfarb, who came to the diocese after a long career as a journalist covering state government and later as spokesman for the State University of New York, has served as diocesan Director of Communications for the past 13 years.

“We are so grateful to Father Doyle and Ken Goldfarb for their many years of dedicated service to the diocese and the people of God,” said Bishop Scharfenberger. “They leave us with a strong foundation on which to build this next generation of Catholic communications.”