A Moveable Feast: Inside Assisi, a slice of heaven 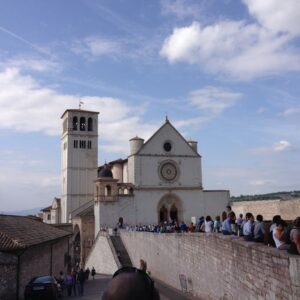 My pilgrimage to Assisi began long before I walked the streets and knelt before St. Francis and St. Clare this October. Although I have always loved St. Francis, the pull to go to Assisi and stand where this great saint lived and prayed and worked became stronger and stronger with every passing year. I read books about it. I dreamed about it. I decided in my mind that there was no way I was going to miss getting to Assisi one of these days. The first time I went to Italy, I wanted to make a quick day-trip to Assisi from Rome, but my schedule at Santa Croce University was too packed, and I didn’t want to rush Assisi. I was right to wait. Assisi is not something you rush. It’s something you savor, slowly, over a couple of days, if at all possible.

Our pilgrimage group was lucky enough to spend two days in Assisi — inside the city walls and out in the surrounding area. Although we didn’t originally intend to go back to the center of Assisi the second day, a large group of us just couldn’t stay away. We had to go back for one more dose of what can only be described as heaven on earth. You can feel the sacredness of the place seeping up through the ancient stone streets. You can sense St. Francis all around you. You can spend hours just walking and sitting and watching the world go by and be perfectly content, which is what we did on our visit the second day.

In today’s little photo essay below, I’ll give you shots from inside the city on both days, with one exception. Although it’s outside the city walls, I’ve included our visit to Santa Maria degli Angeli because the Porziuncula should be included with the rest of the holy sites of Assisi and not with the winery tour. So here you’ll see the beautiful city of Assisi: spiritually powerful, physically breathtaking. I can’t wait to go back.

First stop, the San Damiano cross. This is the cross that spoke to Francis, that all-important moment when Jesus told him to “repair my church, which you see is falling into ruin.” Francis, as we know, thought Jesus meant the actual physical church building, but later Francis figured out that he meant the Church as in universal Church. He founded the Franciscan Order, and the work began and continues to this day. So this cross is pretty special. It hangs in the Basilica of Santa Chiara. (And thank you, Dennis, for snapping this photo despite signs that said it was forbidden.) 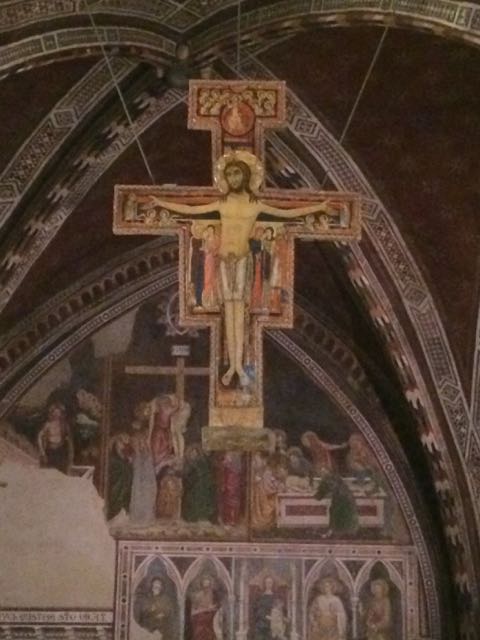 As we made our way through the city we passed lots of little stalls selling cheese and cured meats. Oh, if only I could have taken samples home… 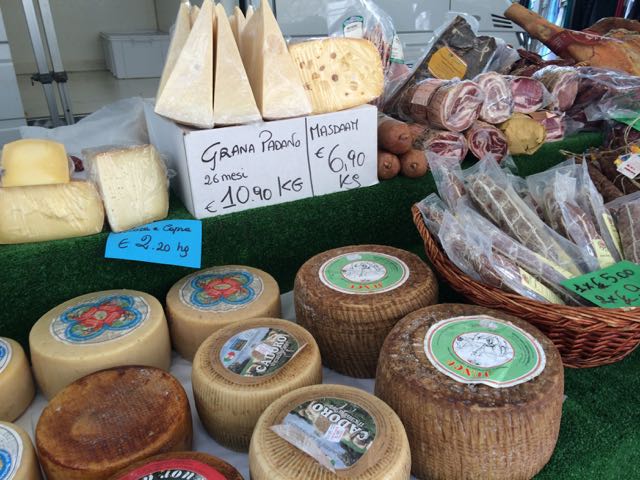 And lots of roadside shrines. Just gorgeous. This one was my favorite. 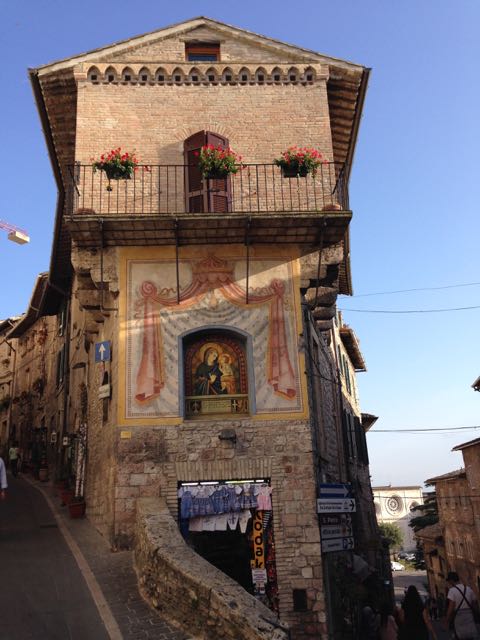 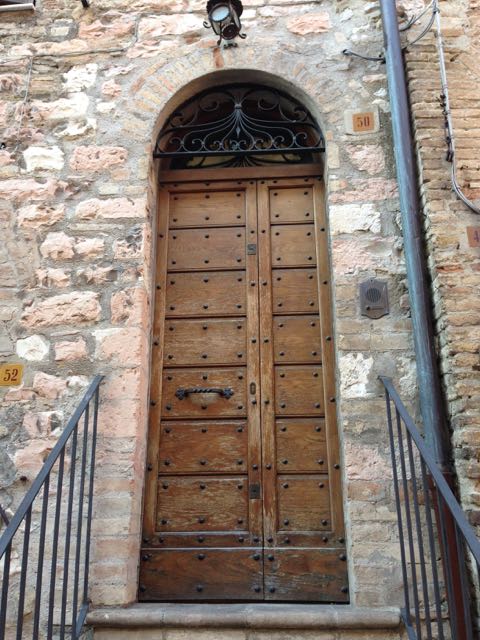 On the street where St. Francis was born, there’s a beautiful church built on the spot, and at the end of the street a little door leading to a shrine that is supposed to be on the exact spot where Francis was born. Here’s the alley… 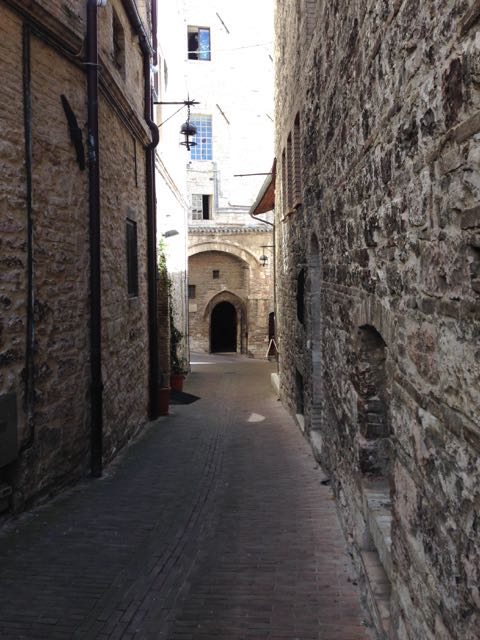 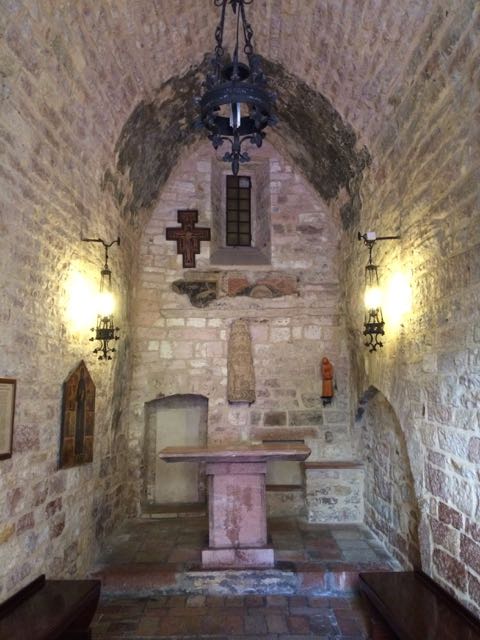 Believe it or not, this alley and that shrine are on a regular street where we found an amazing little restaurant, Otello’s. We had a fantastic meal, and our guide later told us — when she asked where we had eaten — that we had found a local gem. We can vouch for that. Here’s my meal of farro e fagioli. Dennis’ pizza is in the background. And local wine, always wine. 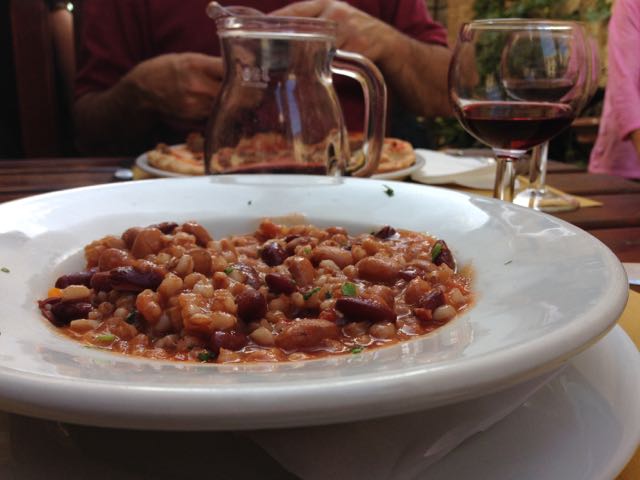 Here’s us looking really happy about being at this restaurant in this city. Assisi selfie. 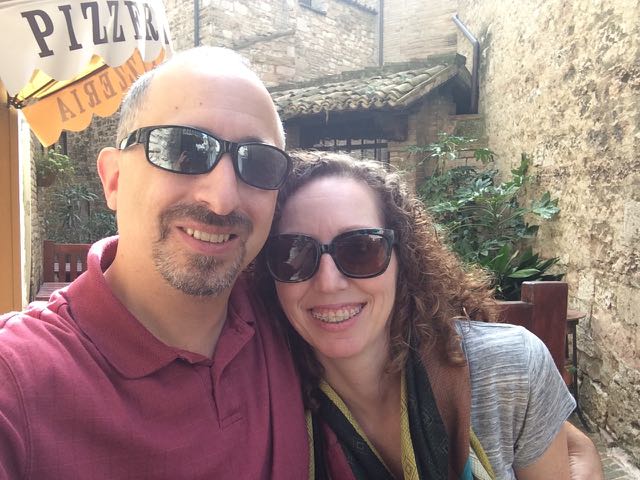 Finally we made our way to the Basilica of St. Francis, the moment I had been waiting for. Okay, one of the moments, but a pretty big one. 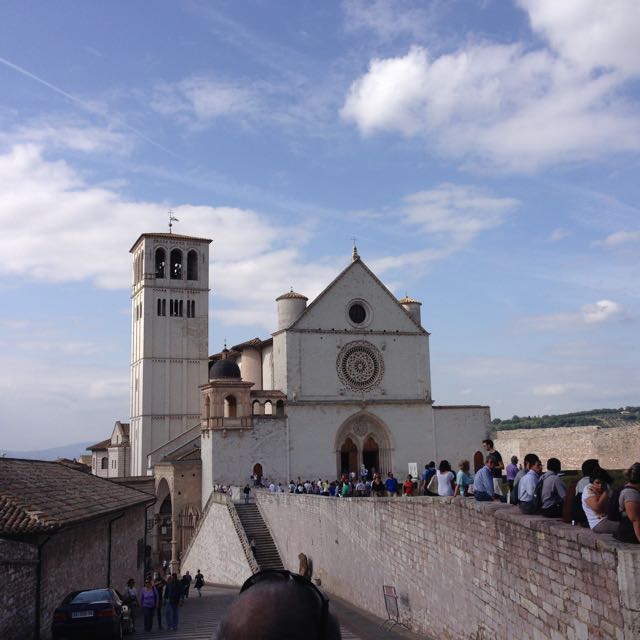 Right where we were standing for the photo above was a home with its shutters open. Dennis managed to catch a boy watching us from the half-open shutter. 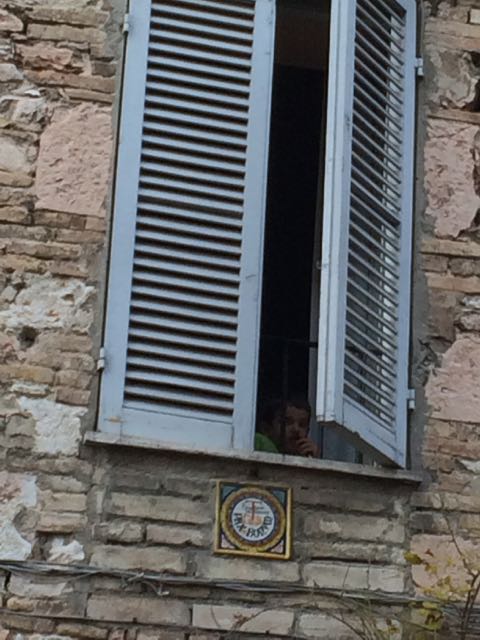 How about this beautiful alley with a view. There’s actually a restaurant at the end of this with a few seats looking out over Umbria. 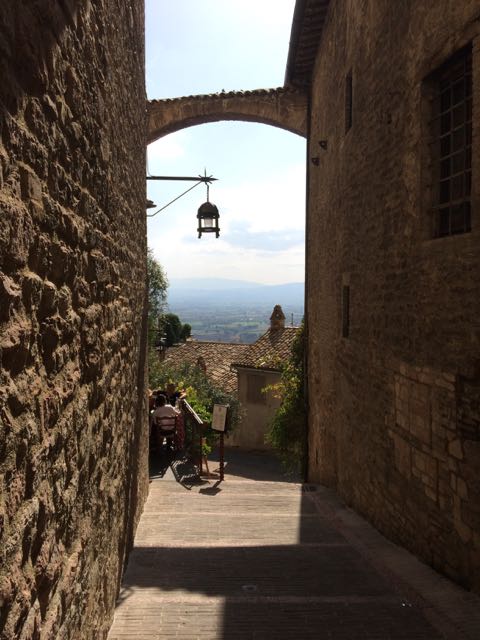 Our first day in Assisi also included a visit outside the city walls to St. Mary of the Angels, which is the basilica that is built over the Porziuncula. So it is a church within a church. Here’s the basilica from the outside: 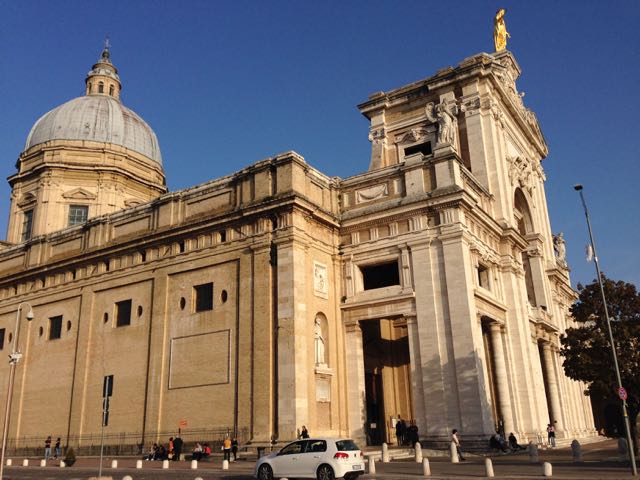 And here’s the inside. The little church is the one where Francis heard Christ talking to him from the cross. (Thank you again, Dennis, for taking a forbidden photo.) 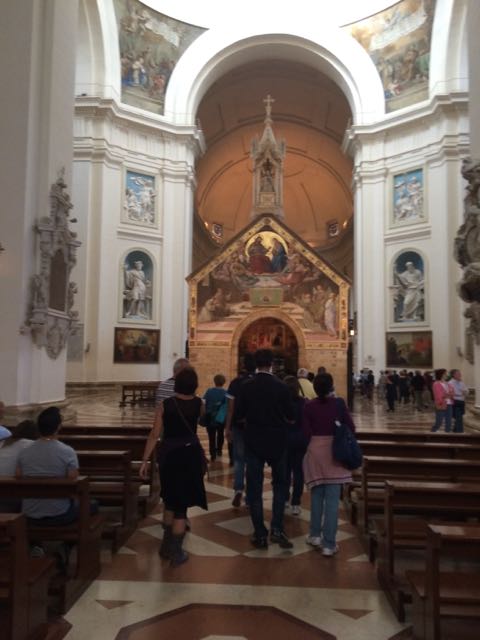 On our second day in the city, we had a chance to relax in the main piazza and just watch the world go by. Make sure you have time to do this when you visit. Here was the view from our table. 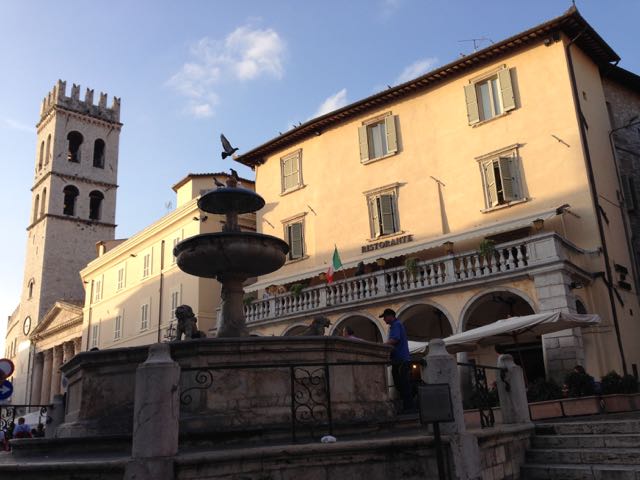 Here we are enjoying Birra Chiara, a beer named after our daughter. Okay, named after St. Clare. 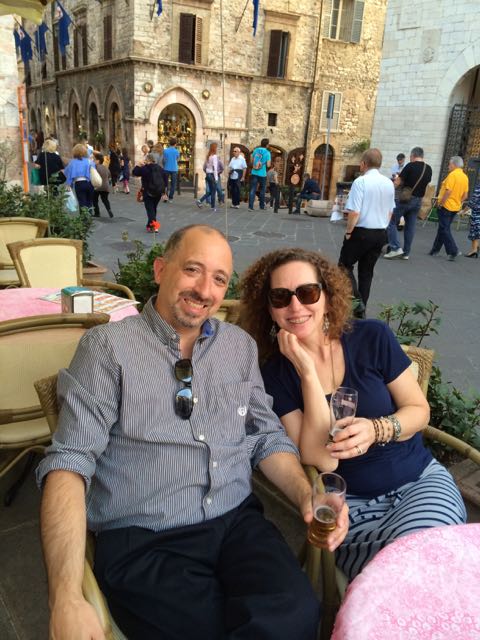 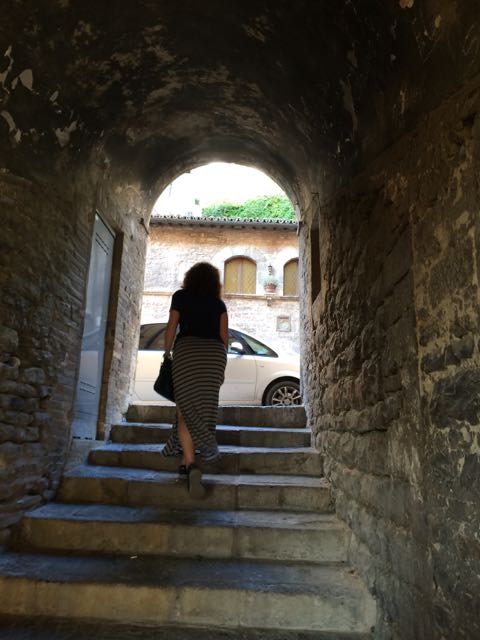 Here’s one last look back at the city as we depart at dusk. 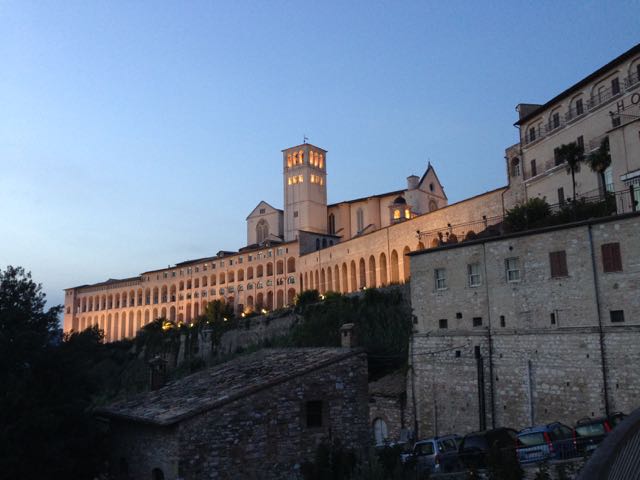 If you’d like to experience Assisi, join me on my next Food & Faith pilgrimage, May 15-26, 2016. Visit my pilgrimage website HERE.

If you missed my earlier posts, click on Florence, Siena, and/or Coffee, wine and beer, oh my.