Mary Undoer of Knots, I’ve got a job -or two- for you 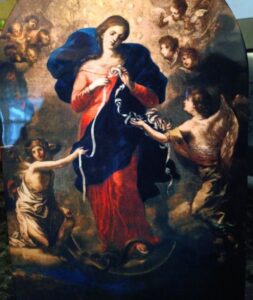 My May Life Lines column, running in the current issue of Catholic New York:

Back when I was young, my mother would take me over to the chapel at St. Aedan’s Church in Pearl River every Monday night for novena. Although the Mary-centered prayer was part of my young spiritual consciousness, after my mother died and I moved away from home, I packed up my interest in novenas along with my old stuffed animals and Barbie dolls. It felt like something that belonged to my childhood, something I’d outgrown.

Even my devotion to my patron saint waned as I aged. The Rosary was always a challenge for me, and Mary always too perfect to view as a role model. I longed for a stripped-down spirituality where I met God in silence by myself, no helper necessary. And for a long time that’s the way I went forward, loving Mary from afar but not feeling the need to draw her close in prayer.

Becoming a mother changed that for me, at least on a surface level. I needed someone who would have my spiritual back, someone who knew what I was going through, someone who had probably cried more than her fair share of tears over her child, her life, her fears. And since I didn’t have a mother of my own to turn to anymore, Mary and I reconnected on the common ground of motherhood. She slowly began to work her way back into my prayer life, but usually only in times of crisis. The Rosary was the prayer I pulled out when I was panicked, when I was in the proverbial foxhole.

Fast forward to just last week. Dennis sent me an email with a video clip about Mary Undoer of Knots, a devotion that is gaining popularity thanks to Pope Francis, who brought attention to Mary under this title when he was a cardinal in Argentina. The image of the Blessed Mother untying the knots of a long white cord is comforting and beautiful in an understated way, even if the Baroque painting is typically elaborate. Something about Mary Undoer of Knots spoke to me, and yet I still wasn’t quite ready to commit.

Two nights later, I met a friend for dinner and, as we were driving, she said, “I just started a novena to Mary Undoer of Knots.” I wondered what it meant that this unusual devotion had surfaced twice in so many days, but, being somewhat distracted and overwhelmed by life and its responsibilities, I put it out of my head. I returned home that night to find an email from another Catholic writer waiting in my inbox. She wanted to know if I’d be willing to be interviewed for a story on novenas. Now there was no denying the Spirit at work in the background of my life. OK, God, you have my attention.

The next morning I went to my computer and looked up the novena to Mary Undoer of Knots, a beautiful prayer that weaves meditations on Mary under this title with the traditional prayers of the Rosary. Despite my Rosary aversion, I decided to trust where I was being led.

“With all simplicity and patience, you have given us an example of how to untangle the knots in our complicated lives…” Those words to the prayer composed by Pope Francis remind us that Mary had plenty of knots to untangle in her own life, although we often choose to forget that. We tend to focus only on her role as Queen of Heaven, Mother of God, titles that, while true and important, whitewash the many struggles Mary faced.

Mary, whom we honor during this month of May, knew all too well the harsh realities of life. As our spiritual mother, she is waiting with open arms to comfort us, not just in moments of crisis but during the mundane and sometimes-difficult moments of everyday life.

Why I kept her at arm’s length for so long is a mystery to me.

Mary Undoer of Knots, pray for us.