“Reckless and harmful.” Who me? 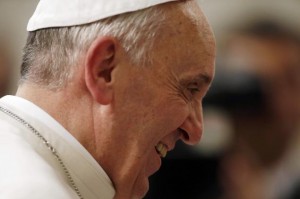 “I want to tell you something. What is it that I expect as a consequence of World Youth Day? I want a mess. We knew that in Rio there would be great disorder, but I want trouble in the dioceses! I want to see the church get closer to the people. I want to get rid of clericalism, the mundane, this closing ourselves off within ourselves, in our parishes, schools or structures. Because these need to get out!” — Pope Francis said at World Youth Day, ending his talk with an off-the-cuff-remark reported by AP, “Don’t forget: make trouble.”

And so I am. Consider it tough love. Really, that above quote, and perhaps the reminder that Jesus himself turned over tables in the temple, are all I need to continue saying what I’m saying without fear and without doubt.

I won’t give the blog post below the dignity of a response other to say that this isn’t me “blowing a fuse.” Trust me, you’ll know when I blow a spiritual fuse, and this isn’t me calling my Church to do better out of “boredom.” This is a faithful daughter of the Church fighting for the institution I love because people are leaving, and I know why they’re leaving and it’s about time I said so.

But, really, you need to read this post because if this is why people give to the Church and why people stay in the Church, then we’ve got bigger problems than I thought. It’s titled, “Avoid Mary DeTurris Poust’s Bad Advice.” Enjoy:

Time constraints prevent my giving Mary DeTurris Poust’s column “Losing my religion” (22 Sep 2013) the attention it deserves, likewise her reiteration of her position in “Words matter” ( 23 Sep 2013), so let me get right to it: Canon 1247 and the First Precept of the Church (CCC 2042) bind Catholics to participate in Mass on Sundays and holy days (irrespective of how crummy the homilies might be) and Canon 222 § 1 and the Fifth Precept of the Church (CCC 2043) bind Catholics to contribute to the materials needs of the Church (irrespective of how ‘welcome’ one feels at the parish).

Neither canon law nor catechetical precept admits of dispensation-by-blog, especially not blogs by folks who should know better than to sit down at a key board while blowing a fuse. Catholics who walk out on Mass because the homilies bore them or who withhold support for the Church because they don’t feel welcome in the parish fail in their duty to render due worship to God and in their duty to share their time and treasure with others. In short, Catholics (including those feeling every bit as frustrated as Poust feels) who follow Poust’s bad advice do so at spiritual peril to themselves.

If Poust would like to add her voice to the chorus of Catholics who have asked for better preaching, and join the throngs of faithful who would like to see the Church more vigorously engaged in the world, fine, but for her to suggest, in the meantime, that quitting Mass and/or cutting off support to the Church is the way to pursue those goals—not to mention her invoking Pope Francis as the inspiration for such a tactic!—is reckless and harmful to others.

With respect, what is “reckless and harmful to others” is watching my Church whither on the vine because I don’t have the courage to speak the truth. While I know the letter of the law, I live by the heart of the law, as Jesus taught.