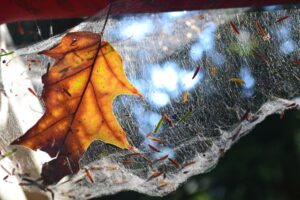 If you go on silent retreat, or spend any serious amount of time in deep and quiet prayer, you’re likely to find that some new synapses are firing. Suddenly it’s as if you’ve discovered a previously dormant channel in your brain.

When we open ourselves up to the movement of the Spirit, we really do become more receptive to things going on around us, energy moving through the universe. I know, it sounds too weird, but it’s true. Trust me. I experienced it this weekend and even now, days later.

Before I left for retreat, I was laying the groundwork, asking people to send me prayer requests, asking for prayers for myself. At one point, when I was talking with a priest I know about some issues I needed to grapple with on retreat, he made a comment about being like a butterfly, and I responded: “I’m so not a butterfly; I’m more of a dragonfly.” And that was that, a comment made in jest without much thought.

Then I went downstairs to find some things to bring for my personal sacred space. I was digging through a box, looking for a religious icon, but instead I found a notecard from a dear — and very holy — woman who died more than a year ago. It had a beautiful watercolor dragonfly painted on the front of it. I had kept it not only because of the artwork but because I wanted to keep a reminder of Maureen close by, but I had forgotten about it after our basement flooded and I packed it up in a box. So I knew the dragonfly (and Maureen) had to come with me on retreat.

When I got to the retreat center, I put my bags in my room and decided to spend some time sitting quietly and getting in the right mindset before dinner. I sat down in an Adirondack chair and within 30 seconds a giant dragonfly landed in the grass right in front of me. A few minutes later, another one zoomed by. As I went to my car later that evening to get something, a dragonfly buzzed right in front of me in the parking lot. And I smiled every time.

Finally, when I was sitting in my favorite prayer spot on Saturday afternoon, having a really deep heart-to-heart silent conversation with God, I reached a point of peace, an interior place where I posed a question, accepted that I had to let it go, and then asked God to please take care of it. And within five seconds a dragonfly landed on the dock right next to my chair. It was the only one I saw that day, but it showed up at the exact right time. Dragonflies, my new favorite thing. Their ability to reflect the light around them, move in all directions, and fly with a lightness that almost makes them seem like they are being carried along by the wind seems perfectly suited to where I am right now. 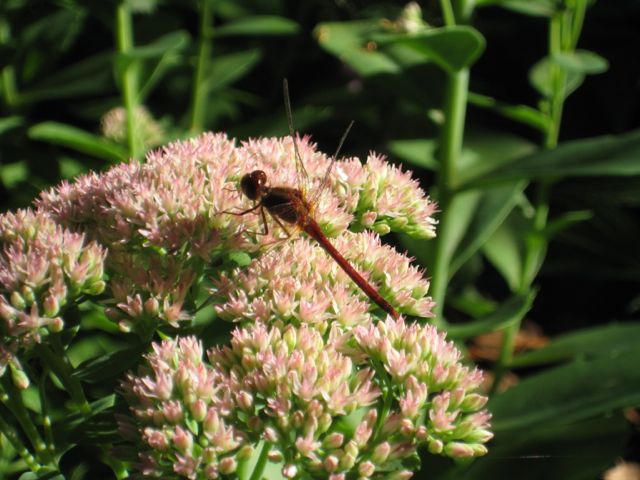 (That’s a backyard dragonfly in the photo below, by the way, not a retreat dragonfly.)

Dragonflies weren’t the only odd convergence for me. Despite a four-page list of prayer requests I received from friends on Facebook, certain people kept jumping to the front of my mind, and not the obvious people. One or two people I have not seen or spoken to in years (decades) were powerfully present, so much so that they felt physically present. And that to me was a wonderful reminder of how we can be connected to another human being when we are willing to open ourselves up to a different kind of relationship, a meeting that doesn’t occur in the traditional way but perhaps in an even more powerful and lasting way. And those people who showed up on my retreat are lingering in my prayers. I’m carrying them with me.

The cosmic connections didn’t end when I returned home. Just yesterday, I opened my mail and found a note from my retreat director along with a prayer card. I assumed that, based on our time of spiritual direction, he figured the words would lift me up and maybe give me something to chew on as I face my spiritual issues. The front of the card was nice enough, but then I turned it over and read the prayer and said, “That sounds like me!” And I read it again and I knew it was mine. So I went down to my computer files just to be sure I wasn’t imagining it or looking for a weird connection where there was none. Nope. It was mine for sure. I had written the prayer for a client last year. It doesn’t have my name on it, so no one but me would ever know it was mine. And yet somehow Walt chose that particular prayer card to send to me. Kind of powerful when your own words are used to show you the way out of your struggle.

Sit in silence, open yourself up to receive, and you’ll be amazed by what comes your way.