Being an older mom has its benefits 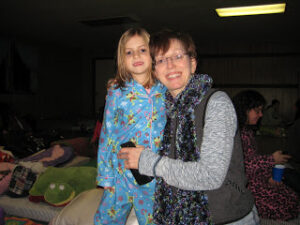 I’m used to being the oldest mom in a crowd, at least when it comes to spending time with my youngest, Chiara, who is only 6 years old. Having had her just before I turned 43, I am closer in age to some of her classmates’ grandparents rather than their parents.

Although on the surface that might seem to be a negative, when I am willing to look beyond the inevitable challenges of being an older mom — like not having nearly the same energy level I had when I was running around with my first 15 years ago — I think being of an “advanced maternal age,” as they say in the OB/GYN industry, has it benefits. Wisdom is the obvious gift that comes with age, but also a deeper appreciation for making the most of the moment when you’re in it. As I approach the half-century mark, I have become all too aware of how fleeting this life is, how quickly my 15 years of motherhood have passed and how quickly the next 15 years are likely to fly by.

Because of my age, many people assume Chiara wasn’t a “planned” baby, that she was an unexpected or maybe even an unwanted “surprise.” If they have the nerve to ask, they are always shocked to find that she was more than planned; she was desperately wanted. At 41 years old, when I thought I was done with babies and diapers and preschool selections, Dennis and I decided we really wanted to try to have one more baby before it might be too late. We were lucky, and blessed, because not long after I found out I was carrying Chiara.

And as much as I offer my littlest one the wisdom of age; she offers me the joy of childhood, something many women my age have outgrown, so to speak. Chiara keeps me young and gives me a chance to play, sometimes when I don’t really feel like playing but find out only after the fact that it was exactly what I wanted, and needed.

Just recently, Chiara and I went on a Daisy Girl Scout winter camping trip in the foothills of the Adirondacks. As far as I’m concerned, that’s enough to scare even the bravest, most energetic mom, no matter how young or old you are. I wouldn’t have chosen this trip, but my co-leader, who is probably 15 years younger than I am and with ample survivalist camping experience in her back pocket, suggested we give it a try. And so we did, with eight 6-year-old girls and seven moms in tow. 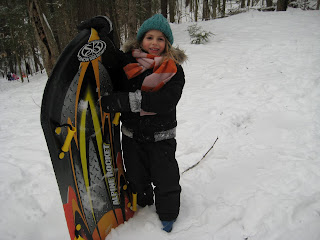 “This is our first camping trip with just the two of us,” Chiara said with excitement, hugging my leg as we waited for our ride to arrive and take us to camp. And with that one comment every doubt about the weekend vanished from my mind.

As we pulled our backpacks out of the truck and made our way on foot down the ice-covered road with only a flashlight to guide us, I looked up and saw the night sky flooded with stars. Then I looked down at Chiara holding my hand and saw the joy in her eyes as she faced the dark woods before us filled not with fear but with anticipation of the adventure that was to come.

That night we slept in our mummy bags head-to-head on crummy mattresses on a hard floor with 28 other people and only one bathroom among us. If you’d told me those details ahead of time, I would have cringed, but there, with Chiara reaching out to pat my hair now and then from her spot inside her sleeping bag, all I could do was smile and savor the moment, grateful for the gift of being the oldest mom in the crowd and knowing just how precious life is right now.

To read other Life Lines columns, visit my website at marydeturrispoust.com