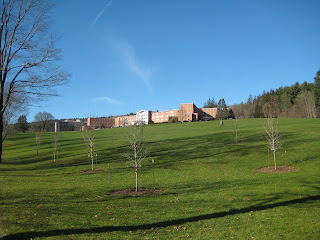 Technically it’s Manic Monday in these parts, but after a weekend yoga-prayer retreat at the Kripalu Center in Lenox, Mass., I’m really quite mellow. Certainly not manic, despite the truly frightening number of deadlines mounting on the dry erase board in my office.

As was the case with my silent retreat in September, I’m not really ready to wax poetic about what happened at Kripalu so soon after. Too much to absorb, so many gifts, so much to process before I can put it in writing in this space. But I wanted to share some little snippets of my wonderful weekend, which centered on a workshop called “Pray All Ways,” offered by Paulist Father Tom Ryan, who is also a certified yoga instructor and whose sense of peace and prayerfulness is so palpable he practically glows or floats. You cannot help but sit in his presence and think, “I want that.” In the best Christian, yogic, loving, non-jealous way, of course.

The photo above is a view of Kripalu from the road below. The former Jesuit seminary sits on land that is just beautiful, even during this in-between time when trees are bare but the ground is not yet blanketed in white. Still breathtaking.

When I first arrived on Friday afternoon, I was in my more manic mode. I rushed inside, worried that my car might not be parked in the right place, nervous about how the weekend would unfold, sure that something would go wrong. (Glass half-empty person, remember.) So I got inside and was asked to fill out of a form with my license plate number, which is new and not committed to memory. Immediately I felt frustration — at not having thought of this need, at not knowing my number by heart, at needing the number at all. So back out to the parking lot I trudged with pen and paper.

And as I stepped outside, another retreatant was standing there staring, and she pointed me to the top of a tree. There, in what was a rather small tree comparatively, was an enormous hawk. I mean enormous. I’m including his photo below even though it’s a little blurry (I didn’t have my good camera with me) because I just needed to give you a glimpse. He sat there for the longest time, unfazed by the people coming and going with their roller-suitcases and cars and chatter. Here he is: 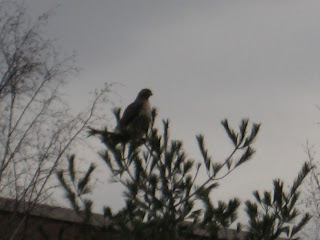 You’ll notice that branch is bending under his weight. He was just majestic. At another point during the weekend, the same hawk was flying overhead, his wingspan inspiring others to stare up at the sky in awe. I never would have known about this resident hawk (the greeter, as he was referred to by the smiling people at the front desk) if I hadn’t forgotten my license plate number. So there you go. I was rushed headlong into the fact that this weekend would be about awareness, about gratitude, about slowing down, about the practice of the presence of God.

The hawk wasn’t the only over-sized animal to cross my path. This giant rabbit, like something out of Alice in Wonderland, let me get within two feet of him to take a picture. On top of that he was surrounded by people enjoying the late autumn sunshine at picnic tables all around him. Even the animals are mellow here. 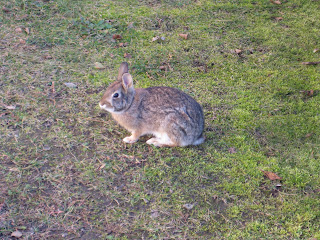 After a solid day of praying and sitting and absorbing so much wonderful food for thought (and wonderful food in general), my retreat partner, Michelle, and I decided to skip Yoga Dance, which was a little much even for this adventurous soul, and go for a little hike to the lake. So worth it.

First we stopped at the small labyrinth. The entrance is in the photo below. I will admit that perhaps this wasn’t the best labyrinth, as I got “lost,” which I didn’t think was supposed to be possible in this walking meditation. I’m guessing it’s much more effective when all the plants are high and in bloom and provide a clear marker of the path. It was still fun. 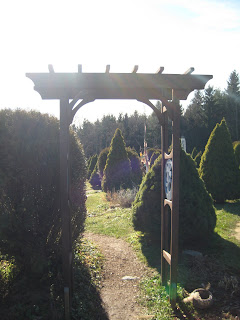 Here’s a photo of the lake and one of me with Michelle: 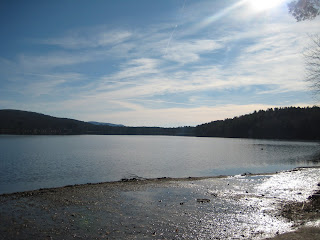 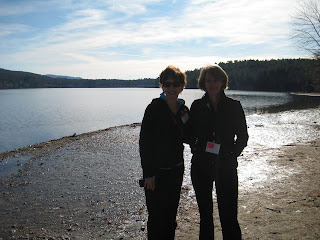 And finally, here’s the statue at the front entrance. Lots of Hindu and Buddhist statues here and there, as you would expect at a yoga center, but our weekend was so focused on Christian prayer and Jesus Christ that it was easy to forget at times that this is no longer a Catholic facility. As we prayed lectio divina, did the Examen, spent long periods on intercessory prayer, and even had Mass while sitting on the floor of the yoga studio Saturday night, I felt so grateful for the experience and so alive with prayerful possibility. 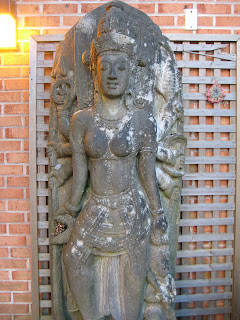 I will be back later this week with some further reflections. Till then, I’ll just share one pearl of wisdom that Father Tom shared with us: Contemplation isn’t always about retreating from the world in silence and solitude; it’s about “taking a long, loving look at the real.”

Look around you today. Right now. Look deeply into the eyes of the next person you meet. Listen attentively to the person on the phone or at the door or in the next office. Drink in the wonder of creation as you drive or walk or run to your next appointment. You just might be amazed to find God right under your nose. Namaste.