Where the Amen meets the Om 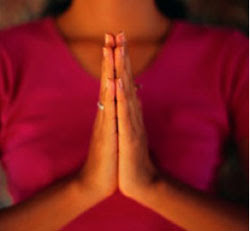 Today, over at patheos.com, I tackle the subject of yoga — something I love — and how it benefits my Catholic prayer life — something some people find impossible or frightening. I’ll start the post here and take you to the full post at that site. Please leave a comment (and, if you have the time, come back and post the same comment here for NSS readers).

When I took my first yoga class more than twenty years ago, I was in a bit of a crisis in terms of the Catholic faith of my birth. My mother had recently died and I had moved out of my family home and across the country. I was searching in so many ways and came upon yoga through a friend who knew a teacher who held classes in her home. There, on a mat in an empty living room, I learned how to stretch and settle my body in new ways, ways that allowed me to more easily enter a spiritual realm that has always beckoned to me.

So began my odyssey into an Eastern world that some would have us believe is not only incompatible with Roman Catholic faith but dangerous to it. Of all the posts I put on Facebook, anything having to do with yoga is sure to stir up ominous warnings. I have been told, on more than one occasion, that it is the work of the devil. And yes, I have read what the Vatican has warned about “New Age” religions (FYI: Yoga isn’t even remotely new). Quite frankly, someone who is inclined to make an idol of yoga, turning it into an obstacle rather than a pathway to God, is probably just as likely to turn certain devotions within the church into idols or superstitions—from obsessing over the trappings of the faith, to burying a statue to sell a house, to leaving slips of papers in pews as a guarantee that a prayer will be answered. Idolatry comes in all forms; it doesn’t take yoga to make that happen.

Permit me, then, to take you into my world of yoga, a world where Amen and Om happily coexist…Continue reading HERE.