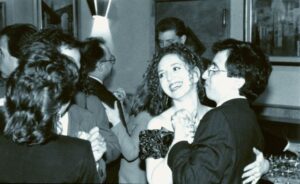 Thirteen years ago today, Dennis and I were married at Our Lady of the Assumption Church in the Pelham Bay section of the Bronx, just across the street from the apartment building where we began our life together. I will never forget that sunny, windy day, when I felt as though I had been given a second lease on life because of Dennis. The fact that we found each other precisely when we did amazes me and reminds me that our journeys through life may twist and turn but they do so with a purpose. We may not realize it at the time, but when we look back — when I look back, at least — I can see the sometimes difficult path I had been on leading me back to New York from Texas so that I would eventually find the person I was meant to marry.

Those early days were filled with so much excitement and joy, from our life in the Bronx to our adventures in Austin and finally to the decision that led us to upstate New York. Three children later, that April afternoon in 1995 seems like a lifetime ago. We are in a very different place from those days of meeting after work at Martin Brothers Cafe on the drag near the  University of Texas to sip margaritas and hang out together, but it is a good place even if it isn’t always an easy place. With no baby-sitter and hardly any free time these days, we will settle for an anniversary lunch thanks to an extra 30 minutes from Chiara’s Tuesday sitter. It may not be on par with our stay at La Mansion del Rio in San Antonio, but we will be together, and, after all, isn’t that what it’s all about. Happy anniversary, Sweetie.